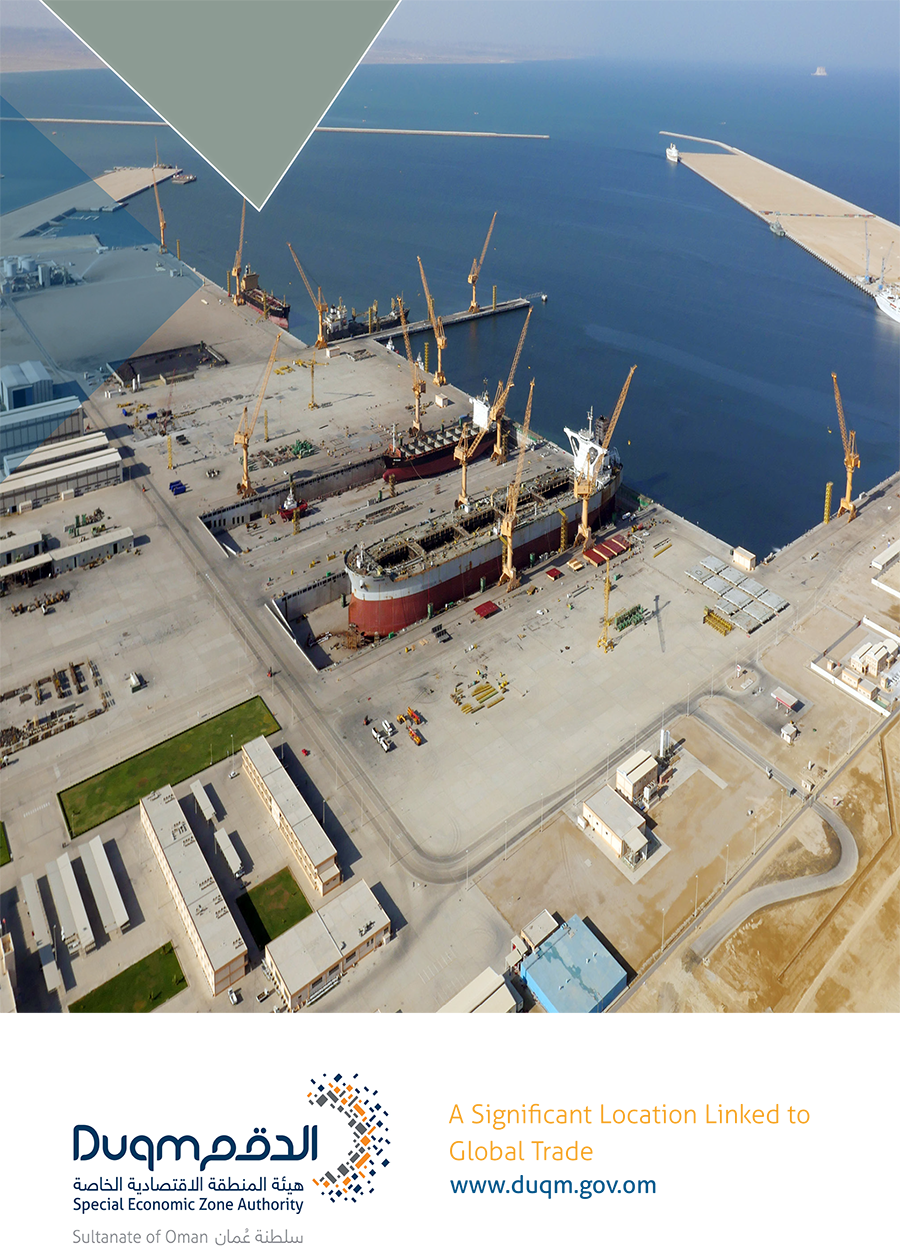 Duqm Special Economic Zone (SEZ) covers an area of over 2,000 square kilometres - based on the most recent expansion of the site area –including 80 kilometres of coastline — planned as an integrated economic development and comprised of several defined zones. Once completed, the development will include a major marine port, ship repair facility, oil refinery and petrochemical complex, fishing port, tourism facilities and transport infrastructure including roads, railway and an international airport.

Duqm SEZ will be one of the largest in the MENA region and rank among the largest in the world. It will be an energy hub, as well as an industrial and commercial centre for Oman and the Gulf region. A multi-modal transport system — including road, rail and air — is at the heart of the City, to facilitate the integration and ease of movement not only within Duqm, but also connecting nationally, regionally and internationally.

In addition to the major employment, infrastructure, and industrial developments in Duqm - many of which are currently under construction or have been recently completed — the Duqm 'community' will be a key component of the wider development of the SEZ. The Duqm community will be developed to provide modern housing, business, commercial, cultural and recreational facilities, an integrated government services complex, and a range of community, social and civic facilities to serve an estimated population of 250,000 residents. A fully self-contained, compact City providing a comprehensive range of services and amenities, the successful growth and development of the community element of Duqm is essential to the realisation of the broader economic development objectives of the SEZ as a whole. Duqm City is located in Wilayat of Duqm, in the Al Wusta Region on the south-east coast of Oman. Strategically located as an industrial port town on the Arabian Sea, Duqm is approximately 550 km south of Muscat, Oman's Capital, and approximately 660 km from the manufacturing and super container hub Salalah in the south. Duqm can be accessed by the following major routes:

Road - At the regional level, Duqm is accessible by road via Muscat-Sinaw-Mahout route (Route 32) and Muscat- Hayma-Salalah-Route 31.

Rail – The development of a national rail system is currently underway, expected to cover a 1,000km track network connecting Muscat with Sohar in the north as well as rail connecting Oman with the UAE border at Khatmat Mahala and Al Ain. The rail network is planned for high-speed trains for both passenger and freight, with later stages of the rail development extending to Duqm. The national rail network was initially expected to be operational by 2020 however the project is now broadly considered 'on hold' with revised time frames yet to be confirmed.

Air – Duqm City has an airport located in the south of the study area. The airport currently operates direct flights to Muscat four times per week. However, significant expansion is planned with facilities currently under construction to cater to 500,000 passengers annually, with a small capability for freight.

Sea - Duqm City is accessible by water at the fishery landing sites near Nafun area, located outside the project areas. Duqm Port has been operational since 2011, predominantly focusing on bulk and break-bulk industry. Fast ferries also operate to and from Muscat, operational since December 2013.

Duqm itself is currently in the process of development from a small fishing village to a major new industrial hub within the Sultanate. Duqm is largely envisaged as an industrial / port focused City — an Industrial Development Gateway — developed to support and boost Oman's economy through port, strategic industry and logistics alongside tourism with a focus on regional GCC markets. Industrial development in Duqm will be linked to the development of a number of key 'anchor' industries based on petrochemicals, fisheries, logistics, ship building/repair as well as downstream industrial development in the form of manufacturers / component assemblers taking advantage of the GCC preferential rates, supported by specific industry incentives and an enabling economic and investment environment.

Since the Royal Decree 119/2011 Establishing Duqm Special Economic Zone Authority and Issuing its Regulations, around 2,046 sq km — based on the most recent expansion of the site area — now falls within the jurisdiction of the Special Economic Zone Authority at Duqm (SEZAD), including 80km of coastline. SEZAD manages, regulates, and develops Duqm SEZ as a financially and administratively independent government entity. SEZAD's key role lies with the planning, design, and implementation of long-term master plans and strategic planning for all development and major infrastructure within the City. This also includes a variety of strategic investment activities to ensure a diverse range of economic activities exist within Duqm, acting both independently as well as being mutually supportive to strengthen the development of the City, as well as the overall economy of the Sultanate of Oman. Furthermore, SEZAD oversees environmental and sustainability elements associated with the expansion and development of Duqm, to ensure the City provides an attractive and sustainable environment to residents, visitors, and investors through the balanced promotion of live, work, and play.

SEZAD's vision for Duqm is as follows:

"The Special Economic Zone at Duqm is a regional hub for maritime transportation and logistics services; a safe haven for investments in export processing industries based on petrochemicals, mineral resources and fisheries; and an attractive tourism destination on the Arabian Sea; thus acting as an important lever for the economic growth of Oman and the enhancement of the quality of life of the local communities of Al Wusta Governorate. SEZAD has the ambition for Duqm to be a model sustainable city characterized by:

• The promotion of social inclusion and diversity;

The site identified for the development of the SEZ includes a diverse range of natural features that each contribute value and shape the unique character of Duqm. The four unique features of topography, ecology, geology and hydrology each present a range of opportunities and constraints that have informed the planning and design work already completed, and will continue to influence the long-term development of Duqm City itself.