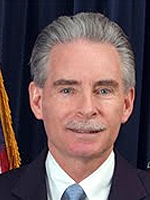 Amb. Schmierer serves as the Chairman of the Board of Directors of the Middle East Policy Council. In addition, he is a Member of the Advisory Board of the National Council for U.S.-Arab Relations (NCUSAR), where he is also a Distinguished International Affairs Fellow.

Amb. Schmierer served for more than 34 years as a State Department Foreign Service Officer, attaining the rank of Minister-Counselor in the Senior Foreign Service. He completed his foreign service career in 2014 as the Deputy Assistant Secretary of State for Public Diplomacy in the Bureau of Near Eastern Affairs (NEA). From July through December 2013 Amb. Schmierer served as NEA Acting Principal Deputy Assistant Secretary, and from September 2009 through August 2012 he was the U.S. Ambassador to the Sultanate of Oman. Prior to his ambassadorship he served as NEA Deputy Assistant Secretary of State for Iraq and as Director of the Office of Iraq Affairs. He holds a doctoral degree from the University of Massachusetts, Amherst.

More Articles From this Author