Duqm SEZ: Welcome to the Future of Growth 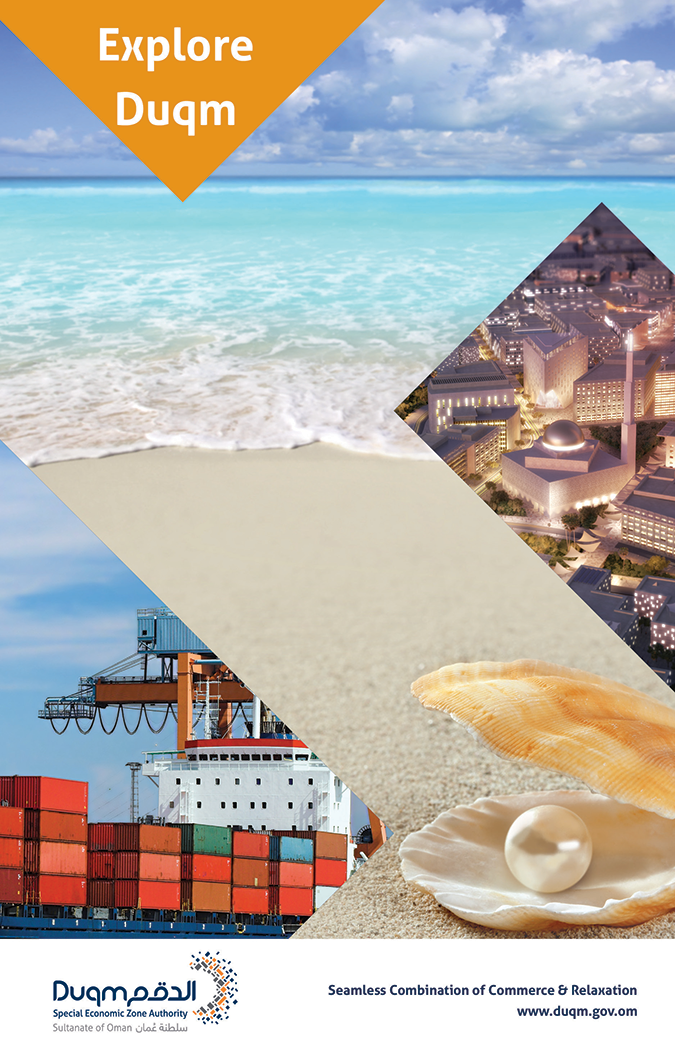 Covering an area of 2,000 sq. kilometers — including 90 kilometers of coastline — Duqm SEZ is a major new growth pole driving the socioeconomic development of the Sultanate of Oman and the diversification of its economy over the coming decades.

Duqm SEZ is one of the largest in the MENA region and ranks among the largest in the world. It is envisioned as an energy hub, as well as an industrial and commercial center. This promising industrial hub, anchored by a world-scale commercial seaport and ship repair yard and a multi-modal transport system — including land, air and railway (in the future) — is at the heart of the city, to facilitate integration and ease of movement not only within Duqm, but also connecting it nationally, regionally and internationally.

Aside from its potential as a manufacturing zone, Duqm is also blessed with the trappings of a promising tourist destination. Scenic landscape and beachfronts, geo-parks and a rich birdlife have made Duqm a haven for adventure tourists and nature lovers. Adding to this appeal are the invigorating southwest monsoon winds that limit daytime temperatures to the low 30s, even in summer.

The Special Economic Zone Authority at Duqm (SEZAD) was established by Royal Decree No. (119/2011). SEZAD's key role lies with the planning, management, and implementation of a long-term master plan and strategic initiatives for all development and major infrastructure of Duqm SEZ. This also includes a variety of strategic investment activities to ensure a diverse range of economic activities exist within Duqm SEZ. These activities are both independent as well as mutually supportive to strengthen the development of Duqm, as well as the overall economy of the Sultanate of Oman. Furthermore, SEZAD oversees environmental and social elements associated with the expansion and development of Duqm, to ensure the city provides an attractive and sustainable proposition to residents, visitors, and investors.

We offer a wide range of business support services tailored to investors' requirements; all required information to set up your business will be provided exclusively by a dedicated point-of-contact.

Conceived as a business-friendly and investment-ready destination, Duqm SEZ has been primed to cater to the needs of domestic and international investors. To this end, the SEZ's regulatory policies have been structured to offer a differentiated approach designed to attract, retain and grow firms and to support their business needs.

Our one-stop-shop offers a simplified methodology for registering your business and investment interest. Once submitted in online, your application is speedily processed against a checklist of criteria, while a dedicated team engages with you directly to assess your specific requirements in the form of leased land, labour, utilities, and so on. Underpinning this process is a friendly, yet efficient, approach that seeks to take your application through to its logical end in a speedy manner.

Duqm SEZ offers an integrated package of incentives and benefits designed to provide investors with a distinct competitive advantage when they set up their businesses, including:

• Free repatriation of profits and capital

• Usufruct agreements up to 50 years, renewable for similar periods

Connecting You to Regional and Global Trade

Duqm Special Economic Zone has the ultimate advantage in positioning your business within strategic distance of some of the fastest growing markets in the Middle East, GCC, South Asia, East Africa and beyond. Duqm is your gateway to regional and global trade.

Duqm has a prime geographical position at the heart of the Arabian Sea and stands at the crossroads between Asia and Africa, so investors can leverage to penetrate high growth markets.

Its geographical location is at the heart of Duqm's appeal as the Middle East's most promising industrial and economic hub. Situated far outside the Straits of Hormuz, the SEZ lies within proximity of international shipping lanes serving East-West, Upper Arabian Gulf, and East-Africa trade. Growing numbers of international investors are now looking to leverage the excellent connections that Duqm enjoys by air, land and sea to access regional and global markets.

• Located at crossroads of trade routes

2. Connect to the Maritime Gateway of Duqm

This is where the Duqm story all begins — a deep-water port abutting strategic East-West and North-South shipping lanes crisscrossing the Arabian Sea and the Indian Ocean beyond. The most important cornerstone of the 2,000 sq km Special Economic Zone is the Port of Duqm with its large breakwater arms, serving as the gateway to the industrial hub and its sprawling hinterland. Drafts of 8 metres alongside the commercial berths and 19 metres along the approach channel allow for the largest maritime vessels to call at the seaport

Nestled within Duqm Port is one of the world's modern ship maintenance and repair yards, which also ranks among the largest in the Middle East and North Africa. Its location on the south-eastern seaboard of Oman, within proximity of regional and international maritime trade routes, is a distinct advantage. So are its twin graving yards, each large enough to dry-dock some of the largest vessels currently in operation, including ultra-large crude carriers of up to 600,000 DWT capacity. An additional 2.8 km of quays allow for the wet-berthing of as many as 10 ships for simultaneous repairs.

At the regional level, Duqm is accessible by road via Muscat-Sinaw-Mahout (Route 32) and Muscat-Hayma-Salalah (Route 31). Duqm SEZ is well connected via highways linking it to all major cities in the the Sultanate as well as the GCC. Within and around the Duqm SEZ are roads of international standard, dual three-lane highways, and dual three-lane arterial roads to enable efficient movement of goods and traffic across the zone.

As a Greenfield development, Duqm SEZ is set to benefit from its integration with the nation's ambitious rail project — a modern rail network designed to connect Muscat with Sohar in the north and connecting Oman with the United Arab Emirates ( UAE ) border at Khatmat Mahala and Al Ain. The rail network is planned for high-speed trains for both passenger and freight, with later stages of the rail development extending to Duqm.

Rail connectivity will enable cargo flows from Duqm all the way up north into the UAE and Saudi Arabia as part of the wider GCC Rail Network.

The project is certainly one of the most ambitious developments in Oman as it is on its way to becoming a worldwide attraction for both investors and tourists. It provides many promises to investors and a relaxing and knowledgeable experience for visitors. Its location plays a large role in its success, as it is in the middle of global commercial shipping routes as well as providing a rest stop to various warships. Duqm SEZ is a booming development catching the attention of opportunity seekers around the globe.