For Women’s History Month, MEPC is highlighting the outstanding contributions of women on our staff and in the diplomatic world. Dr. Janet Breslin-Smith currently serves on MEPC’s board and led a distinguished career including 17-years working as Legislative Director for Sen. Patrick Leahy from Vermont, and 14-years as a professor at the National Defense University. In addition, she spent five years in Saudi Arabia with her husband Amb. James Smith. MEPC catches up with Janet as she is working remotely from her home in New Hampshire. 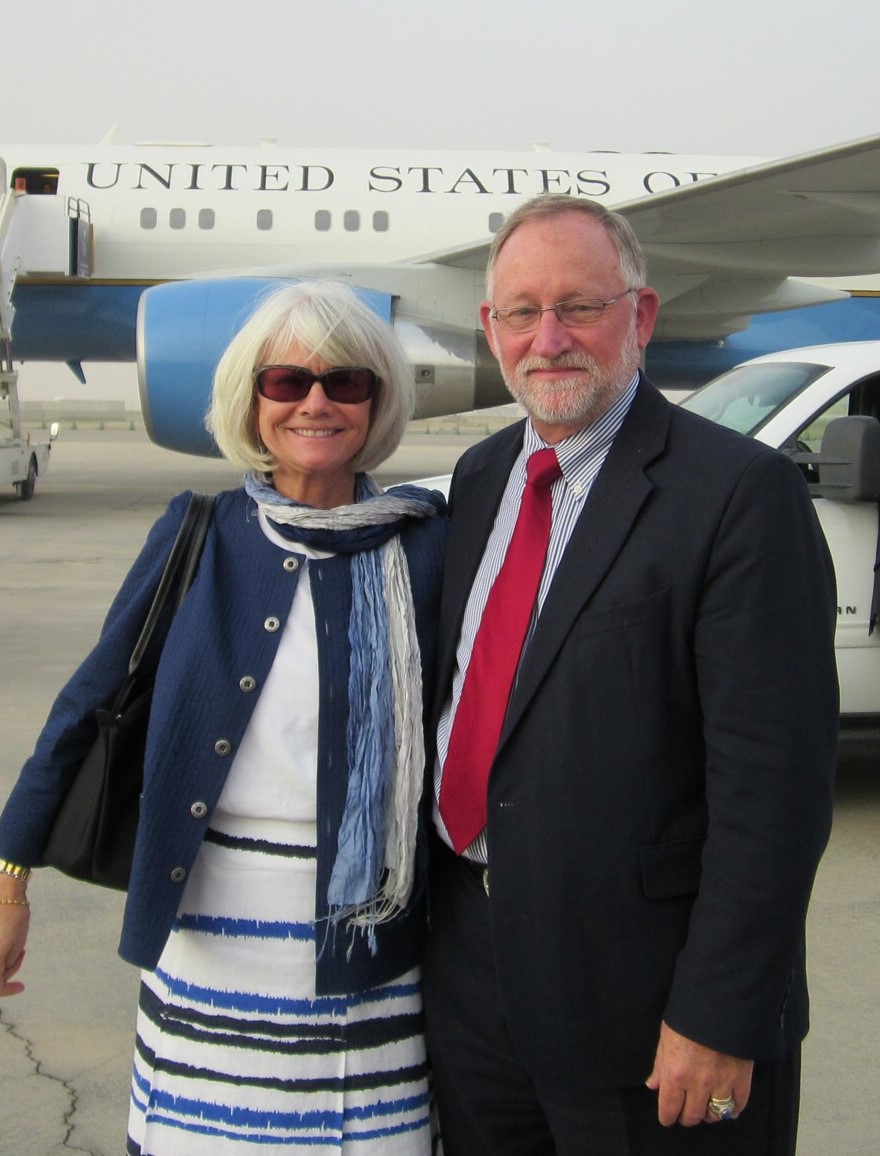 I had worked with Amb. Chas Freeman for many years and we had ongoing discussions about policy issues in the Middle East. Returning from Riyadh, he suggested that Jim and I join the board. I had wanted to continue my contacts with Saudi women students in the DC area and our interests blended together naturally.

There had been one woman on the faculty when I was hired, but that was it. In 1992/93, another woman and I were brought on together. Our advent made the college realize that there needed to be a restroom for women! It had been all-male since its establishment in 1946/47 by the then Gen. Dwight Eisenhower.

In 2000, I became department chair at a time of momentous change. However, I feel that my greatest impact was as a policymaker. Part of my role was integrating a congressional perspective so that diplomats and officers could understand the legislative process as their responsibilities converged more with congressional leadership.

After Sen. Leahy became chair of the Agriculture committee, I worked with the ranking Republican, the very distinguished Sen. Richard Lugar, and collaborated with his staff to completely rewrite the international food aid legislation act. It had been amended continuously since 1954 and tallied 500 pages. We reduced the “bureaucratic barnacles” as we called them and condensed the bill to 25 pages. Being able to work together to modernize the bill was a major accomplishment.

Curious would be the first. And if I had a second, I would describe myself as a determined optimist. Even during the pandemic, I find myself looking for the silver-linings. It’s just an aspect of who I am.

Dr. Strangelove, at one point I had memorized the entire script. It provided insight into the bureaucracy of the military and captured it very well.

One book that stands out to me is Michael Oren’s Power, Faith, and Fantasy: America in the Middle East 1776 to the Present. It chronicles the history of US relations with the Middle East since the Revolutionary War. What I got out of it, was not so much about the Middle East, but more about the predispositions of American foreign policy, regardless of the era.

My first response is my two grown daughters. This country owes a great debt to working moms and young families that have faced a greater burden during the pandemic. I admire and am proud of them.

Second, the trailblazing women I worked with in Saudi Arabia during a time of liberalization that reminded me of my own life experiences. Amal Fatani, then at the Ministry of Higher Education and now Cultural Attaché to the United Kingdom, Nailah Attar, a civic society advocate, Shihana Alazzaz, a lawyer with the Public Investment Fund, and Aljawharah Alassaf, now a lawyer with the Saudi Arabian Nuclear and Radiological Regulatory Commission. I admire all of these women and their daughters because they are finding their own way within the context of the country’s culture.

We were there at a unique time. I had no immediate predecessor as five years before our arrival there bombings in Riyadh caused dependents to be evacuated. Jim and I decided that we wanted to engage in greater public diplomacy and visit every province in the Kingdom.

When I went to grad school, there were few women in national security strategy. Even working on defense and foreign policy on the Hill, I was generally the only woman in the room. In Riyadh, it was a similar period in that King Abdullah was opening up doors and there was an explosion of opportunities. He built around 26 universities for women at that time. Because I come from an academic background, I had a chance to lecture at several universities and connect with these unbelievably talented women.

It was a joke that Jim and I had visited more places in the Kingdom than Saudis. My favorite place is Al-Ula, a Nabatean complex of carved stone facades like at Petra with a nearby ancient adobe village. There was something about it that allowed you transport yourself back in time and imagine what life would have been like there. When I told Saudis my impression of it, they would get misty eyed because with wealth, everyone had constructed large houses enclosed by tall walls. The idea of neighborliness and talking across the balconies has been lost. Sometimes women my age would remember this lifestyle and feel bad that their grandchildren had to be driven anywhere. And of course, we had the same thing in this country. A question is how to reclaim these fundamental connections that existed in earlier architecture.

When I started there were very few women and you had to make your own way. Now, goodness gracious, there are talented women throughout. The number one thing I ask women (and this is true for men too) is, “What professional working environment is the most comfortable for you?” I joke that I am not an orderly person, my desk is piled with papers. Others are disciplined in their work patterns. It just so happened that I found the perfect place for me to work: Capitol Hill. It’s messy, it’s a hodgepodge! But there are many opportunities and different work environments in foreign policy across the State Department, military, advocacy groups, and Congress.

I want to rekindle my work with Saudi Arabian women students in the United States. Several years ago, I had organized a monthly get-together for tea and talks. MEPC organizes invaluable seminars for the Hill and I would love to organize something similar for these students. Additionally, I am excited to pursue initiatives that combine an analytical lens with a human focus, because we all have emotions and our own ways of perceiving the world that influence global events.