Jay Madden
This essay is part of the MEPC's Emerging Voices series, highlighting scholarship from rising academics focused on Middle Eastern studies. Author Jay Madden is an undergraduate student at the Elliott School of International Affairs at George Washington University. His studies concentrate on human rights and governance in the Middle East.

As the Arab world grapples with the potentially devastating effects of climate change, which experts say could have an outsized impact on a region currently experiencing its worst drought in 900 years, the members of the Gulf Cooperation Council have set ambitious goals to develop their share of renewable energy. One county stands out above others in terms of its ambition.

The United Arab Emirates is making progress on its targeted share of renewables for the coming decades, which is set to be 44% by 2050, a significant increase from June 2020 levels at 7%. In addition to the two solar projects already constructed, the UAE is developing four new projects that will put the country on track to reach its incremental goals leading up to 2050, according to a Rystad Energy press release, which stated that the country is “well on track” to increase its contribution of clean energy in domestic production to above half.

Despite this progress, GCC members currently have similar levels of renewable energy output across the board. Renewable energy capacity figures from 2019 indicate that the UAE does not have a significantly higher output than its neighbors. Besides the UAE, Gulf Arab states utilized renewables at a rate of less than .5% of their total consumption in 2018. Significant progress stands to be made throughout the region, but the UAE is leading the pack.

The Emirates’ continued pursuit of renewable energy despite the Covid-19 pandemic has attracted investors and developers. In April 2020, Abu Dhabi announced the lowest tariff for a photovoltaic solar project in the world. The Emirates also have some of the lowest power purchase agreement (PPA) prices in the world, and both factors further contribute to the country’s potential for growth in renewables in the coming decades. 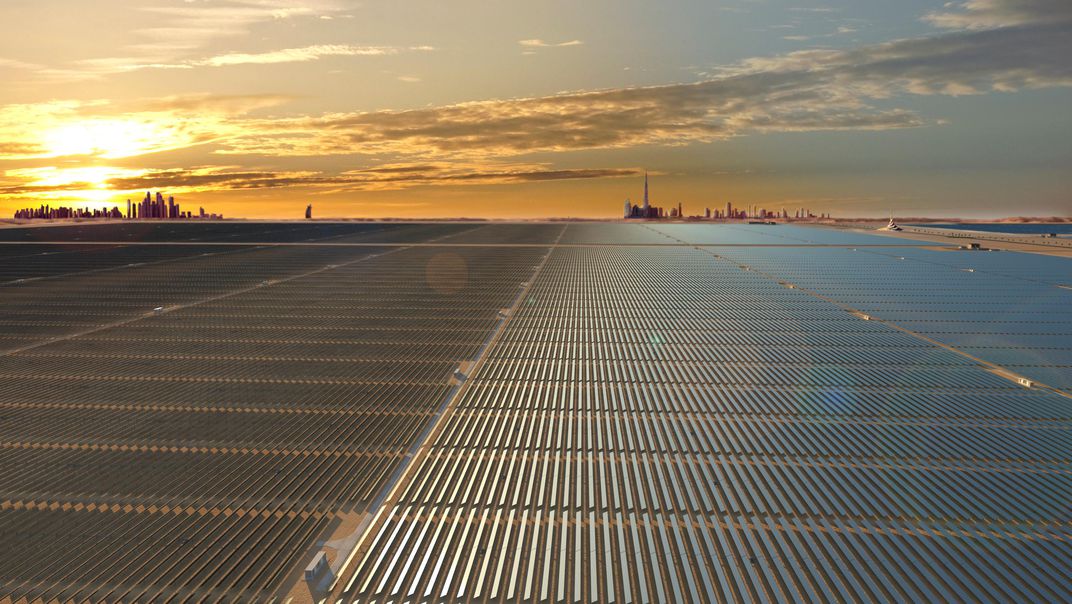 Many consider the Emirates, especially the metropolitan hubs of Dubai and Abu Dhabi, to be global centers of innovation. The UAE ranks first in the 2020 Global Innovation Index in the Arab world and Persian Gulf countries, well ahead of Saudi Arabia, though below Israel when considering the Middle East as a whole.

The recent normalization agreement between the UAE and Israel signals an increased willingness to make public their collaboration on technological development. In January 2021, the two countries signed an inaugural agreement on renewable energy, seeking to increase bilateral commercial ties and shared solar and other energy technologies. The UAE’s willingness to overlook regional tensions in pursuit of its energy goals is another striking example of its commitment to a green future fueled by international cooperation.

Experts point to several reasons for which the UAE has pursued diversification of its energy supply. Notably, the GCC countries face significant economic risk due to a collapsing global oil demand, as nonrenewable sources of energy make up a significant portion of their export revenue. As the COVID-19 pandemic has slowed oil consumption, on top of countries around the world turning to renewables as a way to slow potentially catastrophic levels of warming, GCC countries aim to diminish their dependence on fossil fuel revenues and usage at home.

Furthermore, the environmental effects of fueling global dependence on fossil fuels are felt by residents in Gulf countries. Heat waves have caused disruptions to daily life in the region where temperatures can reach upwards of 120 degrees F in the summer months. The UAE and other wealthy monarchies have come up with some stop-gap solutions, such as air-conditioned sidewalks and markets.

But these are not permanent solutions, and they only address the problems of less privileged members of society in a limited sense. The GCC countries rely heavily on migrant workers to carry out infrastructure building, and these workers have long suffered from heat stress, dehydration, and other complications from working outdoors in such a harsh climate. Warmer climates can also pose increased risk of spreading vector-borne diseases like malaria and yellow fever, threatening the health of all in the region, but especially the poorest. The health of their populations is surely a consideration when Gulf leaders set climate goals.

A new generation of leadership is also thought to be somewhat responsible for the increased focus on renewable energy. Saudi Crown Prince Muhammad bin Salman has set ambitious climate goals as part of his Saudi Vision 2030 initiative, aiming for 50% renewable energy by that year. However, the kingdom has not made similar progress towards this goal as the UAE, which is currently the world’s largest consumer of oil for electricity production. In fact, after Vision 2030 was launched, Saudi Arabia only installed 397 megawatts of renewable energy, whereas the target is 60 gigawatts by 2030.

While Saudi Arabia may not be on track to meet its renewables targets, the oil-rich Gulf states are certainly reckoning with the role that their main source of income will hold in the future. The threats that climate change poses to the already arid environment are immense, and the GCC countries’ populations stand to lose a lot if action towards the goals is not taken.