Sumer Robbin
This essay is part of the MEPC's Emerging Voices series, highlighting scholarship from rising academics focused on Middle Eastern studies. Author Sumer Robbin is a senior at the Maxwell School of Citizenship and Public Affairs at Syracuse University pursuing her B.A. in International Affairs with a concentration in Diplomacy/Security and the Middle East as well as a minor in Religion.

On September 10, 2022, Marvel entered into arguably one of the most intractable disputes of the 20th and 21th centuries: the Israeli-Palestinian conflict. The Marvel Cinematic Universe (MCU) announced at the D23 Disney Expo the recent casting of Shira Haas as the Israeli Superhero ‘Sabra’ for the upcoming Captain America: New World Order film.

The emergence of the superheroine into the multi-billion-dollar film franchise has left many divided on MCU’s decision. In introducing this character in the superhero universe, Marvel has created a difficult task for themselves in diverging from the character's controversial past and executing a superheroine narrative separate from the conflict. Explained in Sabra’s origin story, the character was raised in a special settlement run by the Israeli government and was created to serve the Israeli national intelligence agency, the Mossad, with her mutant powers. In real time, the Mossad is often criticized for its covert intelligence and counterterrorism operations that use targeted killings and assassinations; while these missions are considered critical to Israeli security objectives, they have been categorized as “diplomatically harmful.” 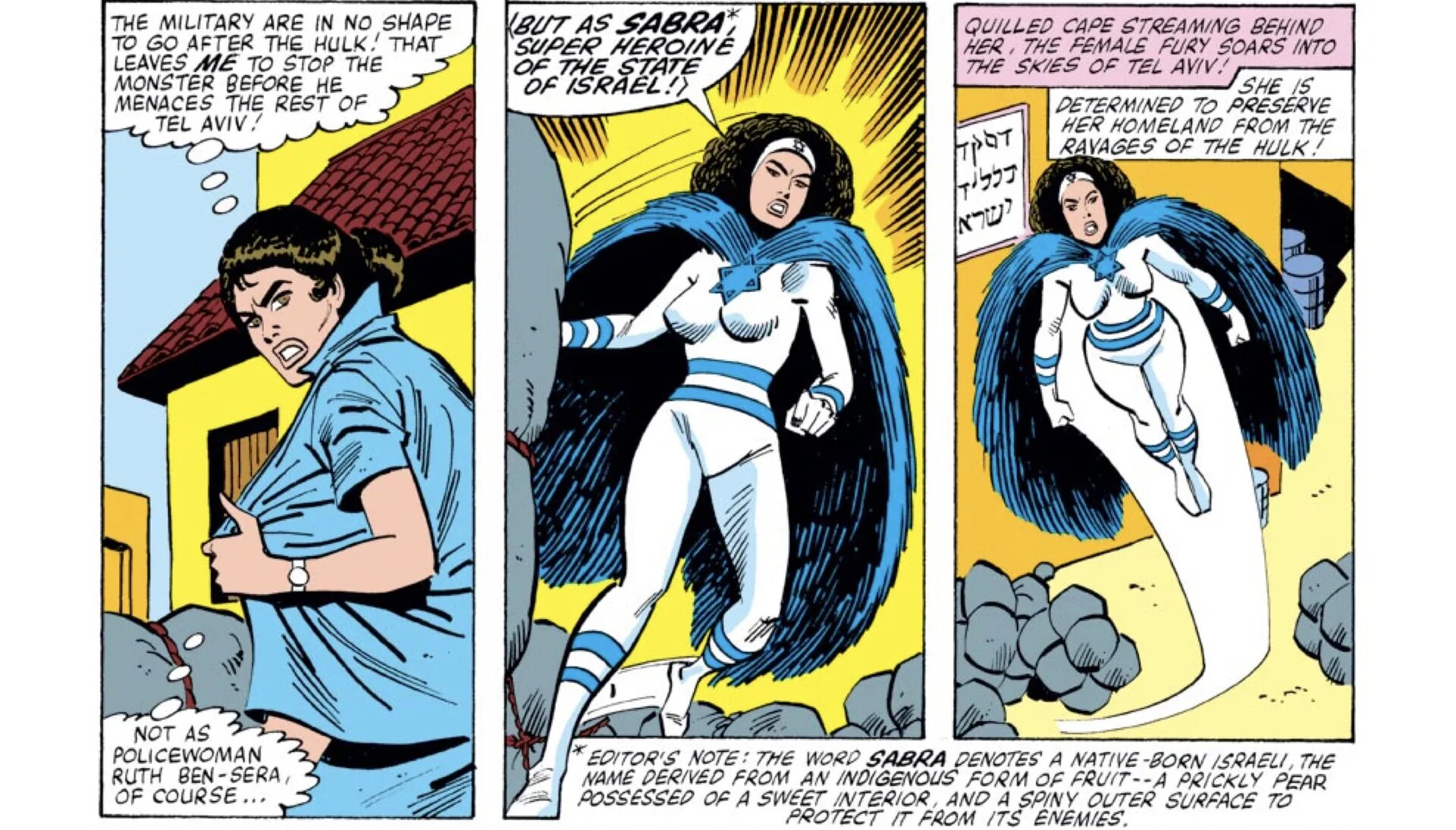 The name chosen for the superheroine has further complicated Sabra’s emergence into the popular movie franchise. As illustrated above in one of the Sabra comics, ‘sabra’ in Hebrew is a Jewish person born in Israel, derived from the word for prickly pear. To Palestinians, the connotation behind the name triggers memories of the Sabra & Shatila massacre. The 1982 massacre resulted in the killing of thousands of Palestinian refugees in Lebanon by Christian militia, in coordination with the Israeli troops stationed there at the time. Although the character was created one year prior to the massacre, the name continues to leave painful associations for those affected by the conflict. Deepening the wound, the Sabra announcement came less than a week before the Sabra massacre’s 40th anniversary, leaving many to debate whether this was coincidental or not. Within hours of the news, #captainapartheid began trending on Twitter as Palestinians and political activists took to social media to protest the announcement.

Contextually, the character of Sabra was created in 1980 during the Cold War. During this time, Marvel constructed multiple politically charged characters such as Marvel’s ‘Red Guardian’ character, a Moscow-born Soviet counterpart to Captain America. However, the re-introduction of Sabra into the franchise arguably elicits Marvel’s renewed political reach. Some older Sabra comics depict nationalist rhetoric and negative stereotypes, thus amplifying concerns of how Sabra, a historically politicized character, will appear in the upcoming film. 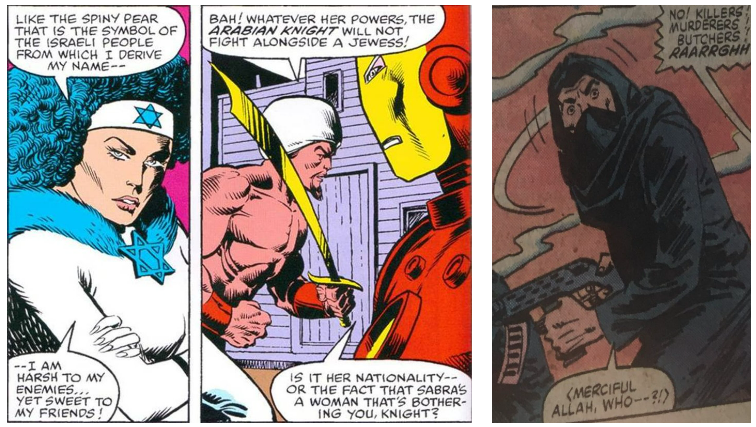 To many’s concern, several of the character’s remarks throughout the comics fall under a broader anti-Arab discourse, in which Arabs are painted as antisemites, misogynists, and as terrorists. There, accordingly, exists fear that these narratives will be pushed towards a wider – and potentially younger  – audience with the comic-to-movie character adaptation. One comic, featured below, shows a Palestinian boy killed in an attack, stating that “it has taken the hulk to make her see this dead Arab boy as a human being.” Comics such as this one portray a one-dimensional character who, while portrayed as a hero, lacks self-awareness. 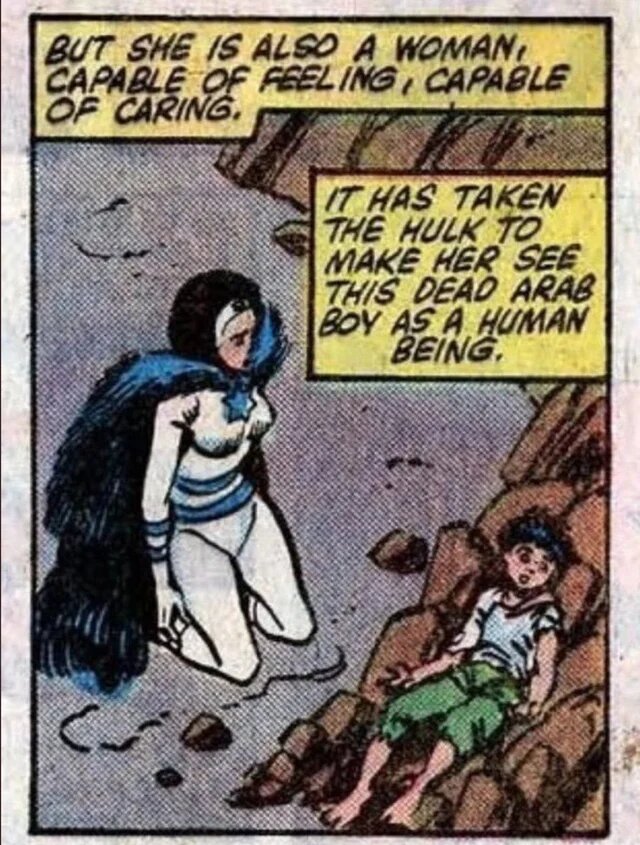 Sabra, adorned in her white-and-blue colored and Star of David costume, could play a major role in driving American public opinion. Those opposing the addition of the character in the MCU state that the role itself sends a strong message in solidifying U.S. opinion of the conflict as biased towards Israel, while others believe Sabra will play a meaningful role in promoting acceptance of and attention to the State of Israel.

Recognizing the conflict at hand, Marvel responded that they will move forward with the character but in a “new approach,” creating a ‘fresh image’ for today’s audience, compared to the original character over four decades ago. While this public statement has not offered tangible information on Marvel’s next steps or a solidified course of action, it provides hope that Sabra’s onscreen portrayal will differ from that of the contentious comic book persona. Furthermore, representatives of Marvel have clarified that Sabra’s role will be as a “superficial character” and will not hold a main character role in the upcoming Captain America film. This statement has brought many to question why Marvel would introduce  a controversial character that does not majorly contribute to the storyline.

Whatever the intention, Marvel officials are moving forward with their decision, leaving many wondering, what’s next? Although difficult, Marvel’s ‘new approach’ has the potential to forge a different path from its comic book inspiration. By readapting this superheroine and addressing the various criticisms many have cited, it’s possible that the MCU may pull off the risk, but only with transparency and receptivity can Marvel succeed in this endeavor. There are growing concerns that Marvel may become another organization who gets caught into the already divisive conflict. Only time will tell if Marvel will complete a true superhero move and succeed in pleasing their fans, cinematically and politically.