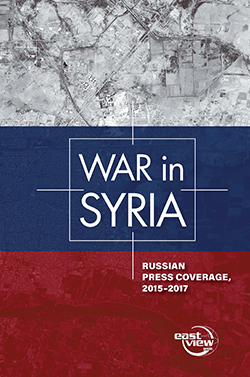 This is a collection of articles from the Russian press about the war in Syria dating from just prior to direct Russian military intervention there in September 2015 through May 2017. Almost all of them were initially published in East View Press's weekly publication, The Current Digest of the Russian Press, except two that were translated just for this volume. They were drawn from 13 different Russian publications and written by many different Russian and a few Western authors. Subjects covered include the initial Russian intervention at the end of September 2015; Russia's relations with several countries (especially Turkey, the United States and Iran); ceasefire and conflict-resolution efforts; and events as they unfolded.

What this collection shows is that there is a wide variety of viewpoints about Russian involvement in Syria being expressed in the Russian press. Several authors stoutly defend Putin's policy, but there are others — such as Pavel Felgengauer, Vladimir Frolov, Aleksandr Golts and Aleksandr Shumilin — who cast doubt on its efficacy. In a December 2016 article, for example, Frolov observed, "The war crimes of progovernment [i.e., pro-Assad] forces on 'liberated territories' (including Aleppo), the responsibility for which will be increasingly laid on Moscow as Damascus's chief sponsor, are becoming a painful problem for Russia's international image" (pp. 183-4). Despite the Putin regime's authoritarian nature, then, the Russian press can and does express critical views on sensitive issues such as Syria.

One of the most illuminating sets of articles is on "Russian-Iranian Cooperation." Although Russia and Iran are commonly viewed in the West as allies, the articles in this section express a generally negative Russian view of Iran. In an April 2016 article published in Kommersant, for example, Sergei Strokan and Maksim Yusin noted several differences in Russian and Iranian policy. These included Moscow's emphasis on preserving the Syrian state, and not necessarily Assad's rule, compared to Tehran's aim "to keep President Assad and his inner circle in power." They conclude that this has resulted in key Syrian leaders "paying more attention to Tehran than to Moscow" (p. 192). Stroken and Yusin also portrayed Iran as unwilling to compromise in oil-producing-country efforts to restrict production in order to support prices. In addition, Fyodor Lukyanov (one of the most prominent Russian foreign-policy experts in Moscow) stated bluntly, "Russia and Iran are not allies," and that "there is no single and unequivocally positive view of Moscow in Iranian expert and political circles" (p. 205). Russians, then, see the Russian-Iranian relationship as complex and difficult.

Russian authors express genuine confusion about U.S. policy in Syria. They saw the Obama administration and now see the Trump administration as wanting to avoid getting involved in another quagmire. Sometimes, though, the United States undertakes military actions there suggesting it has changed its mind, but then does not follow these up. Yet, while the United States is generally seen as making matters more difficult for Russia in Syria, it is not seen as an implacable opponent there either.

In addition to the main index, there is also a newspaper and author index. This, however, is organized by publication followed by the authors whose articles appeared in it. But some of the authors' articles were published in more than one place, and so are listed separately. It would have been more helpful to have an index that listed authors once alphabetically with references to all of their publications included in the one entry.

Overall, though, this volume performs an important service in making the diversity of Russian press coverage on the war in Syria available in English. While there are those in the West who think that Moscow has basically won that war, what this collection shows is that Russian observers see the Syrian conflict as extremely complex and filled with perils for Russia. With the conflict in Syria likely to continue, there will undoubtedly be enough material for a sequel to this volume — something East View Press should definitely publish.