Turkey's July 15th Coup: What Happened and Why 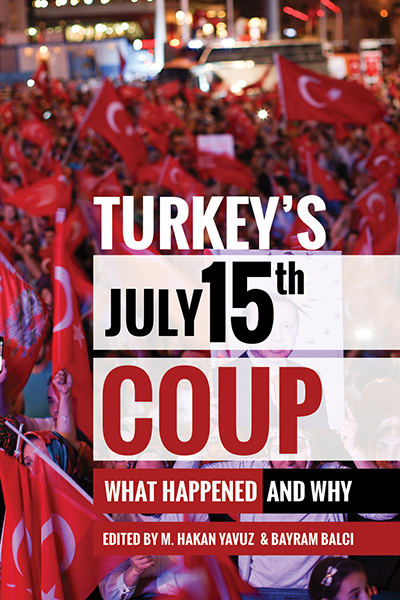 On the evening of July 15, 2016, elements of the Turkish military attempted to overthrow the Turkish government of democratically-elected President Recep Tayyip Erdogan (1954- ) whose roots were in political Islam. The coup perpetrators mobilized over 10,000 armed men, deployed tanks and soldiers on key bridges in Istanbul, seized the state television channel, took hostage the chief of the Turkish General Staff, employed aircraft to strike the Turkish parliament and several other government buildings, but failed to capture Erdogan. Before it was suppressed, 272 people had died, including 171 civilians, 63 police officers, 4 soldiers, and 4 rebels. More than a thousand others were injured. As Michael A. Reynolds, one of the 12 authors in this important collection of 12 chapters and a postscript authoritatively dealing with these events, concludes: "A successful putsch would almost certainly have triggered a civil war, one that would have likely acquired a religious dimension" (p. 99). And "civil war would have converted Turkey from a buffer against refugee flows—Turkey hosts nearly 3 million refugees from Syria alone—to an exporter of refugees. This would have had dire consequences for the political stability of a Europe already grappling with a teetering European Union and surging population" (pp. 99-100). Thus, this was anything but another routine Turkish coup by a secularist military bent on resetting Turkish politics back to a perceived stable path. Rather, it was "a fierce struggle for dominance between two rival wings of Turkey's Islamists" (p. 100): Erdogan's AK Party and Fethullah Gulen's movement.

Fethullah Gulen (1941- ) is an important interfaith Islamic scholar and imam who heads the Gulen Hizmet (Service) Movement, as it is known by its followers, or Cemaat (Community/Assembly) Movement, as it is known by the broader Turkish public. As such, he is the leader of the modern Nurculuk (Nurcu or Nur) movement and the author of more than 60 books. His teachings derive from the famous, mystical Sunni Muslim scholar Said Nursi (1873-1960), who was also referred to as Bediuzzaman (the unique of the age) and interestingly, an ethnic Kurd. Gulen has stated that he believes in science, interfaith dialogue among the People of the Book, and multi-party dialogue. This new Nurcu movement has a powerful transnational darshane (originally, reading circle) network of schools in Turkey, Central Asia, and the Balkans, and also exercised a strong presence in the media, Zaman being the largest Turkish (and very good one too) newspaper until Erdogan closed it down on March 4, 2016.

The Gulen Movement is also an international network of universities, hospitals, charities, business associations, news outlets, and schools spread across more than 150 countries. Gulen or Hocaefendi (Respected Teacher), as he is often referred to by his followers, has lived in exile in the Pocono Mountains of Pennsylvania in the United States since 1999 and suffers from diabetes. Some dismiss him as a dangerous cult leader infiltrating existing state structures such as those of Turkey, while others hail him as an enlightened beacon of interfaith ecumenicism. Apparently he is both.

For example, Gulen supposedly advised his followers to continue to live incognito inside "the arteries of the system" (p. 49) until they had amassed enough power to take the state over. Gulenists who had successfully infiltrated the Turkish judiciary and police, among other state institutions, and were at that time allied with Erdogan, then-Turkish prime minister, were apparently behind the sham Ergenekon and subsequent Balyoz (Sledgehammer) trials (2008-2011) that resulted in several hundred military, journalists, and opposition lawmakers, among other secularists, being sentenced to lengthy prison terms. These victims were only released in April 2016 and all verdicts annulled pending a retrial after subsequent evidence showed that they had been convicted on blatant and even sloppy forgeries written in fonts only invented after they were supposedly written and riddled with anachronisms that betrayed their fraudulent nature such as naming organizations that had not even come into existence at the time of their reputed crimes, among other inconsistencies.

Thus, after neutralizing their common secular opponents, Erdogan and Gulen had become bitter political enemies. In December 2013, Gulen accused Erdogan of corruption, while Erdogan charged Gulen with trying to infiltrate state institutions and establish a "parallel state" (p. 106) that would eventually overthrow him. Subsequently, Erdogan accused what he termed the Fethullah Gulen Terrorist Organization (FETO) of masterminding the failed coup of July 15, 2016, and demanded that the United States extradite him. However, as of April 2018, the United States has refused on the grounds that there was no credible evidence indicating Gulen was guilty. Thus, the status of Gulen has also become one of the main reasons for the current crisis in American-Turkish relations. In Erdogan's view, it is as if Turkey would have refused to extradite Osama bin Laden to the United States if it had held him.

After the editors open with a useful historical/political introduction, 12 chapters and a postscript ensue. In chapter 1, Hakan Yavuz analyzes the development of the Gulen movement in three separate stages: a communitarian network of piety, education-cum-media global movement, and a secret religious political construction or parallel state tasked to gain ultimate control of the Turkish government. In chapter 2, Mujeeb R. Khan examines the Gulenist attempt to control state institutions and weaken the rule of law. For those tempted to see inherently weak Turkish institutions in all this, Khan tellingly points out how "the recent election of U.S. President Donald Trump . . . shows the looming threat of a constitutional crisis is something even deeply institutionalized and consolidated democracies cannot take for granted" (p. 65). He then proceeds to defend some of Erdogan's actions which have brought heavy criticism from the United States and other Western democracies. For example, the celebrated case involving Can Dundar, the editor of Cumhuriyet, for revealing state intelligence operations in Syria, is "quite similar to those employed by the Obama administration to prosecute leakers and journalists" (pp. 65-66). According to Khan, Dundar had falsely claimed that Erdogan was supplying weapons to ISIS when actually they were meant for the Free Syrian Army (FSA) opposing the Assad regime. Thus, "the derailment of the operation allowed ISIS to attack FSA positions and capture key sectors along the Turkish border" (p. 66). In another example of how Erdogan suffers unfairly from false accusations, Khan cites how under the Turkish president "regulation of alcohol . . . was still more liberal than that found in many American states" (p. 69).

However, Khan's characterization as one of the "myths widely disseminated in the Western media" (p. 67), the claim that following his electoral defeat in June 2015 "Erdogan 'deliberately declared war on the Kurds for domestic political purposes'" (p. 67), as well as other assertions dealing with the renewal of the Kurdish struggle in Turkey, is surely one-sided. To his credit, Khan does fault Erdogan for "his populist rhetoric and intolerance of criticism" (p. 72). "Even more serious has been a sweeping purge of perceived critics in the wake of the coup that has targeted many individuals with no known links or knowledge of the coup plot" (p. 73). "Tens of thousands face lost careers and educational opportunities for association alone" (p. 74). "In the wake of the Gezi and Gulen crises, he [Erdogan] has not grasped that by healing societal rifts and creating enduring democratic political institutions he could have emerged as a historical figure even greater than Ataturk" (p. 72).

In chapter 3, Hakan Yavuz and Rasim Koc study the causes of the Gulen movement-AK Party conflict. They conclude that while Gulen claims no involvement with the coup, he does acknowledge that some of his sympathizers might have been embroiled. Moreover, weighty cumulative evidence indicates that Gulenist officers in the military did indeed perpetrate the deed. Michael A. Reynolds in chapter 4 offers a thorough account of the Gulen movement's major characteristics along with its tactics of infiltrating the state. He concludes his chapter by listing the negative consequences of the coup on US-Turkish relations. In chapter 5, Kilic Kanat compares the coup with previous Turkish coups and concludes that the Gulen coup attempt was unique in preparation, implementation, and organizational aspects. He also analyzes the unique reaction of the Turkish public in favorably responding to Erdogan's call for it to protest the attempted overthrow by claiming the streets.

In chapter 6, Caroline Tee investigates the collapse of the alliance between Gulen and Erdogan. A major step along this path was the Gulenist-infiltrated press, courts, and police discrediting Erdogan with corruption allegations, which although probably credible, failed to resonate with the public for what it viewed as a judicial coup against the democratically elected government. In chapter 7, Sabine Dreher examines the importance of neoliberal economic policies on the Gulen movement (GM) and how it presented itself as a moderate, peaceful, and friendly organization. Ironically, however, Dreher points to how Gulen's neoliberal policies led to illiberal Islam.

In chapter 8, Bayram Balci explains why it is especially difficult for scholars to evaluate the Gulenist movement because of its secrecy and continuing alterations employed to adjust to new circumstances. He then turns his attention to the Gulenists' operations in the Caucasus and Central Asia, but notes how the failure of the coup has now limited their influence in these areas. In chapter 9, David Tittensor demonstrates how the Gulenists captured and politicized the judiciary to discredit the once respected military in the Ergenekon and Balyoz (Sledgehammer) cases. He also examines how the Gulenists manipulated the scholarship that tried to analyze it, and how the government has failed to produce incontrovertible evidence of the movement's guilt despite the strong evidence against it.

In a short postscript Hakan Yavuz asks, "how credible are alternative scenarios?" (p. 309), and replies that "as a longstanding scholar of the Gulen movement, there is no question in my mind that the top leadership of the movement planned and carried out the coup" (p. 314). On the other hand, he dismisses three alternative interpretations that 1) "a coalition of factions within the military launched the coup" (p. 309); 2) "the Erdogan government was complicit in the coup. . . [as] justification to suspend the constitution and many legal rights" (pp. 309-10); and 3) "it was 'a controlled coup' allowed to go forward by the government . . . to reap the political benefits of defeating it" (p. 301). He also adds that "in the first few hours . . . when it seemed the coup might succeed, it was sobering to see how many Western pundits and politicians from CNN to FOX News were willing to openly and brazenly countenance the violent overthrow of the democratically elected Turkish government" (p. 315).

The book ends with a rather comprehensive selective bibliography and short, but useful index. Strangely, the book's title does not even include the word Gulen, an addition that would have more successfully identified its subject. Also the editors somewhat confusingly inform us that the "the Motherland Party of Turgut Ozalp . . . is now the AK Party" (p. 5), while a mere two pages later they write that "the new AK Party . . . [was] an offshoot of the Welfare Party (Refah Partisi) of Necmettin Erbakan" (p. 7). So which one was the progenitor? Actually, in part, both, but with a new twist, namely a pro-Islamist party that disavowed any Islamist tendencies but in the words of its leader Erdogan, constituted a train to democracy that one might exit at any time before reaching the supposed destination.

This is an incisive, well-written study that not only will be the definitive account of the attempted Gulenist coup, but also a heuristic interpretation of its important ramifications for the future of US-Turkish relations and the Turkish government. In addition, it is a rather convincing, although only partial, understanding and defense of Erdogan's policies so much criticized now in the United States. Thus, this book constitutes a valuable study for government practitioners, academic scholars and the attentive lay public.