Saudi Arabia under Ibn Saud: Economic and Financial Foundations of the State 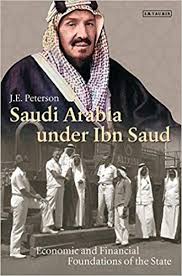 While the promise of this book’s title is not actually fulfilled by the content, the work nonetheless proffers a valuable and rare perspective on events as the kingdom’s founder, Ibn Saud, sought to sustain the regime he had established. The author’s essential purpose is to chronicle the career of the most important and powerful nonroyal member of Ibn Saud’s Diwan (the Royal Court), Abdullah Al Sulayman Al Hamdan. Trained in accountancy, and by virtue of that skill and family ties, Abdullah Al Sulayman entered Ibn Saud’s service some years before the conquest of the Hijaz to help organize the finances for the emergent political order. He rose to become minister of finance and remained in that position throughout Ibn Saud’s reign, only stepping down from official duties with Ibn Saud’s death and the ascension of the king’s eldest surviving son, Saud.

As the book makes abundantly clear, formal titles hardly do justice to Abdullah Al Sulayman’s actual role in the kingdom’s government. Indeed, such titles, given the nature of politics at that time, can obscure political reality. They presume a formalization of roles and an institutionalization of government functionality that did not yet exist. In view of the personalized method of governance, Abdullah Al Sulayman’s own abilities and loyalty, and, arguably most critical, Ibn Saud’s profound trust in the man, the range of his responsibilities expanded enormously. His bailiwick came to embrace all that pertained to financial and economic matters. He not only tracked the financial position of the regime, crafted its budget and oversaw the dispersal of funding for its operations, he also had primary responsibility for locating its sources of income.

That latter obligation propelled his involvement in a wide variety of economic and infrastructure-development projects, including those pertaining to petroleum. Not only did he negotiate the oil concession that led to the creation of the U.S.-owned oil concessionaire, ARAMCO, but remained during his time in office the principal official overseeing relations with the oil industry, responsible for, inter alia, modifications to the concession. Importantly, this book correctly puts paid to the notion that the award of the concession reflected a pro-American bias on the part of the kingdom. It did not; rather the selection of a U.S. company was a function of the size of the initial payments, that such payments were in gold, and that the oil concessionaire would pursue a robust program of oil exploration and development. Saying that, however, is not to dispute that the U.S. concessionaire would catalyze a profound U.S. government interest in the country that clearly benefited the Saudi political order, a matter the work also highlights.

Abdullah Al Sulayman quickly established a reputation within ARAMCO and its owner companies for his unrelenting efforts to both augment the government’s oil revenues and achieve a greater government role in oil operations. Some of his aspirations in the latter regard would go awry. A key example was when he sought to establish a Saudi merchant-marine fleet in association with the Greek shipping magnate Aristotle Onassis to handle the transport of all the kingdom’s crude oil and products. The matter ultimately went to arbitration, with the resulting decision going against the kingdom. As both the source and dispenser of government monies, Abdullah Al Sulayman became involved in other critical areas of governance including national defense and foreign affairs. Ultimately, Peterson persuasively builds a case that, without the efforts of this indefatigable and indispensable official, governance itself would not have been possible.

If one were tempted to look to English history for an equivalent courtier to Abdullah Al Sulayman, one might risk a reference to Thomas Cromwell (albeit the hero of this work survives his royal master, never having lost his trust). For this reader, some of the most arresting episodes in the book concern Abdullah Al Sulayman’s scramble in the pre-oil era to find the wherewithal to enable Ibn Saud’s political order to function. These details are of importance, illustrating the mechanics of early Saudi governance with granular detail. And they broaden our view of the political dynamic at work at the time, beyond the oft-told tale of Ibn Saud’s efforts to manage tribal relations and ease the anxieties of xenophobic clerics.

This account of a career also serves to illustrate the transition between modes of governance, one personal, built on “l’etat, c’est moi” and one increasingly institutionalized and specialized. The book promotes a view that Abdullah Al Sulayman was an early proponent of rationalizing government methodologies. And if such efforts during his lifetime came to little, this failing could reasonably be said to reflect much more the nature of the political culture than the aspirations of this individual. What the work also illustrates were the continual efforts by external governments and U.S. companies involved in the kingdom to promote institutional reform, most importantly on economic and financial matters.  This reflects the significant truth that, just as oil conferred unparalleled benefits on the kingdom, it would also foist significant obligations upon the political order to adapt to and implement foreign methodologies.

In witnessing Abdullah Al Sulayman’s strenuous efforts to finance his sovereign’s rule, one is reminded of an implacable fact that had heretofore compromised the pursuit of a unified system of government across the breadth of the Arabian Peninsula: the territory’s impoverishment. The traditional economic activities of the peninsula’s inhabitants were utterly incapable of producing the requisite surplus. It is no surprise therefore that so large a share of the monies that Abdullah Al Sulayman avidly sought to tap to ensure the kingdom’s financial viability came from external sources, be it from pilgrims to the Islamic holy sites, subsidies from foreign governments that sought for their own reasons to bolster the kingdom’s stability or the ultimate provider of fiscal resilience, the industrial world’s insatiable demand for oil.

This work also invites conjecture about the Royal Court. It is worth noting that Abdullah Al Sulayman was the only commoner serving at a senior level within this institution to have been born in Nejd; the remainder of those selected by Ibn Saud to advise him came from other Arab countries or, in the case of one, H. St. John (Abdullah) Philby, England. Certainly, Abdullah Al Sulayman’s talents, his commitment to his sovereign, and the energies he brought to his duties all will have served to promote this individual. But the work also suggests that Ibn Saud found in Abdullah Al Sulayman a kindred spirit from Nejd, one who shared a willingness to make use of the tools and technologies of the world beyond the kingdom.

The court was a fascinating mélange of individuals, a demonstration of Ibn Saud’s openness towards and profound attentiveness to the outside world and his need for expertise not readily available within the country. As a result, the court reflected an outlook and advocated goals that could stand at variance with the religious ideology that legitimized Ibn Saud’s order and the attitudes of a large percentage of the ruler’s subjects. The complexion of the court was also a function of the critical need to ensure that those who were authorized to enact the king’s commands were utterly dependent on him and him alone.

It would have been a welcome addition to this work if the author, a scholar possessed of an exceptional knowledge of twentieth-century peninsular history, had used this account as a portal to investigate the one critical institution at the center of political life during the period. Indeed, a basic critique of this work is that the author abjures a more structural and analytical approach to this account of Abdullah Al Sulayman’s career just as it judiciously avoids any criticisms of the man or any considerations of the tensions that are occasionally alluded to in the text between Abdullah Al Sulayman and the Royal Court, or between him and his sovereign’s sons.

One suspects such an approach with the attendant caution reflects the origins of the work. As noted in the prefatory remarks, the book’s genesis was a research project undertaken by Exeter University in the United Kingdom at the behest of and funded by Abdullah Al Sulayman’s family. It was, in short, an effort, and an entirely justifiable one at that, to prepare an encomium. Under the project, the university scoured all publicly available sources for references to Abdullah Al Sulayman and procured a trove of documentation that served as the source material for the text. Indeed, the nearly 70 pages of notes add substantially to the work’s value. Notwithstanding this reservation, the book is to be recommended for the insights and information it provides on the post-conquest phase of Ibn Saud’s evolving system of governance. While not for the novice, those with a sustained interest in the kingdom will be informed and, one imagines, delighted by the content.