Rentier Islamism: The Influence of the Muslim Brotherhood in Gulf Monarchies 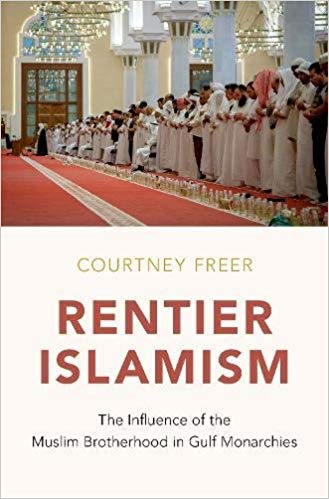 Rentier Islamism: The Influence of the Muslim Brotherhood in Gulf Monarchies is a revised and reorganized version of the PhD thesis from University of Oxford by Courtney Freer, currently a research officer at the London School of Economics’ Kuwait Programme on Development, Governance and Globalization in the Gulf States. Freer’s monograph is a seminal work challenging traditional rentier-state theory and illustrates a perfectly designed comparative case study of Kuwait, Qatar and the United Arab Emirates.

The book fills an obvious gap in the literature regarding the linkage between the practices and influence of political Islam and rentier-state theory. The motivation behind this research is also rooted in a lack of studies on this area. Hence, in the words of Freer, the monograph unveils the “shortcoming of the prevailing literature on political Islam, as it fails to account for the presence of politically relevant brotherhood movements in the gulf monarchies thus does not describe how their function differs from that of the Ikhwan in other parts of the region” (p.8).

Rentier Islamism consists of eight chapters divided into three main parts. “The Uncharted Territory: Political Islam and Rentier States,” the opening chapter, provides a critique of Kuwait, Qatar and the UAE. It summarizes the political role of Islamist movements in rentier states, as well as sources and the case-selection process of the study. Kuwait, Qatar and the UAE are categorized as the super-rentiers of the Gulf, due to their enormous wealth and small populations heavily dominated by expats, which puts them at the center of attention for political groups. The overall goals of the book are also highlighted in this chapter: “to shed light on why and how Muslim Brotherhood branches have emerged as important social and political actors in the wealthiest oil monarchies” (p. 8).

Part I, “Origins,” consists of two chapters. The first, “No Taxation, No Representation?: Political Opposition in Rentier States and the Origins of Muslim Brotherhood Movements in the Gulf,” briefly discusses theories of the rentier states and Islamist movements with specific attention to the Muslim Brotherhood. At the end, Freer explains the concept of rentier Islamism, but this part could have been longer and placed at the beginning so as to give more detailed information to the reader before delving into the case studies. The concept of rentier Islamism explained in detail is postponed until Chapter 8.

Chapter 3, “Systems of Governance and Politics of Opposition in the Super-Rentiers,” continues the examination of conceptual and historical roots of politics in the Gulf that started in the previous chapter. The author provides practical information on the nature of the monarchies, their systems of government and civil society via a brief representation of the milestones in the political histories of Kuwait, Qatar and the UAE. “Governed by powerful ruling families, independent institutionalized political life in super-rentiers is hampered, and civil society and politics remain largely informal. More formal is the power of Islam in these states” (p. 41).

Part II, “Rise and Fall,” starts with Chapter 4, “Education and Influence,” which discusses the origins of rentier Islamism, outlining the early years of the Muslim Brotherhood in small oil monarchies between the 1950s and 1970s. The emergence of indigenous Ikhwan movements started with the education sectors, where they were in competition with Arab nationalism. The chapter aptly points out how rulers cooperated with local branches of the Muslim Brotherhood in building a barrier against the influence of Arab nationalism in their societies. These years led Islamist movements to spread seeds throughout the Gulf monarchies by accommodating their influence on education, a basic component of the society. “Rentier Islamists thus came to hold positions of social capital through the systems they criticized due to their peaceful and stable ties with governments that hoped to promote Islamism over nationalism and with rulers who wanted to appear appropriately religious” (p. 68).

Although they share demographic, economic and political conditions, the local branches in Kuwait, Qatar and the UAE did not exactly correspond to each other. In particular, in the post Arab-nationalist era, as discussed in Chapter 5, “Politicians or Preachers?,” indigenous Ikhwan movements evolved along divergent paths, although based on the same gap in all of the societies: “…the need for security and a sense of identity” (p. 70). The chapter elaborates the movements from the late 1970s until the 2000s. The occupation of Kuwait in 1991, as well as the overall turbulence in the region, had led to an extremely loyal local support base for the movement. However, in the case of the UAE and Qatar, this produced clashes with the politics of the state for various reasons.

Both supporters and critics of the Ikhwan’s political ideology are emphasized in Part III, “Modern Rentier Islamism,” through the 2000s, “when the organization came under greater scrutiny worldwide as a potential source of political opposition” (p. 105). This chapter provides readers with an insight into the transformation of each branch of the Ikhwan through three case studies in the first decade of the 2000s. The Kuwaiti Ikhwan became politically more active than the branch in the Emirates, which had a serious clash with the Brotherhood and the UAE authorities and had their activities silenced. The case of Qatar illustrates an almost paradoxical example of gradual elimination even as it is being supported abroad. This is the most intensive chapter in the book, with extended coverage of issues surrounding both domestic and international politics, including 9/11, the Arab Spring, petition movements and the start of the Emirati fight against Islamists.

Chapter 7, “Challenges and Opposition in the Twenty-First Century,” concretizes the struggles and opportunities of indigenous Ikhwan movements in the post-Arab Spring era. This chapter manages to combine a discussion of the repercussions of the Arab Spring at the regional and domestic levels with an analytical assessment of rentier Islamism. The limited role of the Ikhwan in Qatari domestic politics is accounted for by the substantial institutionalized power of Qatar’s Ministry of Awqaf and Islamic Affairs (p. 150). Freer also compares the strategies of Qatar and the UAE to contend with the impact of Ikhwan in domestic politics: “Unlike the UAE, Qatar’s government aimed to integrate Islamism, at least to a certain extent, rather than to attempt to eliminate its influence” (p. 150). This is also due to the failure of the Ikhwan to develop a solid structure in Qatar and the role of the Ministry of Awqaf in religious affairs, mentioned above. For these reasons, the impact of Islamism remained personalized and informal in the Qatari context. By contrast, Freer points out, the UAE, despite the protective policies of the state, continued to be a battleground of transnational movements like the Brotherhood. One of the most alarming indications regarding Islamist influence in the Emirates is provided by Shaikh Mohammed bin Zayed himself “‘It would take twenty-five to fifty years to root out extremists from the education system,’ claiming that in the western part of Abu Dhabi emirate alone, the government shut 80 percent of 262 [Talibani] Quran Schools” (p.167). The book does not raise the question of whether these extreme policies against Islamists in the UAE are warranted or are being used to legitimize the state’s influence on social issues. However, while these concerns are specifically discussed, defining the UAE’s policy making as “creating an enemy” (p. 137), greater focus on the perception of an existential threat would have made the author’s analysis even richer.

Chapter 8, “Explaining Ikhwan Politics in the Super-Rentiers,” is the heart of the book, a brilliant summary of the conceptualization of rentier Islamism in the previous seven chapters. Freer states that the existing literature is not comprehensive enough to define “political opportunity structures for Muslim Brotherhood groups in the Arabian Peninsula” (p. 181). What is lacking in traditional rentier theory is that “it fails to take into account the links between the political and cultural/social in states with under-institutionalized political systems” (p.182). Thus, rentier Islamism goes beyond the formal sphere, where the state is the main driver, into the informal one combining religion, social networks and social power. This phenomenon is conceptualized in Freer’s work as the political capital of the Muslim Brotherhood, which deserves a book-length discussion (p.184). In particular, three points made by Freer in this chapter should be highlighted. First, “Islamists adapt their activities within the systems in which they operate” (p.181); their form and structure have massively evolved from where they started in the early 1950s. Secondly, the Brotherhood emphasizes “the unity, or tawhid, inherent in Islamism, linking the grassroots to political debates” (p.181). Since the Arab states of the Gulf are all Muslim and display no tendency to transform themselves into a secular system, this religious call by the Ikhwan gives legitimacy to the movement in the eyes of the public. Thirdly, Freer posits that:

With the Muslim Brotherhood unlikely to disappear from the political or social scene, as it can maintain its position in the social sphere, a strategy of co-optation or cooperation is more sustainable than one of crackdown. Because they gain appeal primarily through an ideology unaffected by the presence of wealth, Islamist organizations, in particular the Muslim Brotherhood, will not become any less influential in the Gulf in the coming years, despite campaigns against them” (p.183).

This is a study that provides an excellent conceptual overview of the adaptability of rentier Islamism and the complexity of domestic politics in the Gulf monarchies. The transformation of Islamism and its impact on government policies and society as another “form of nationalism” (p.173) is aptly defined in Rentier Islamism. The book provides “a critical addition to the existing literature on the Muslim Brotherhood and the Arabian Peninsula” (p.173), providing revelations for scholars and students of the Gulf.