The Peace Process between Turkey and the Kurds: Anatomy of A Failure 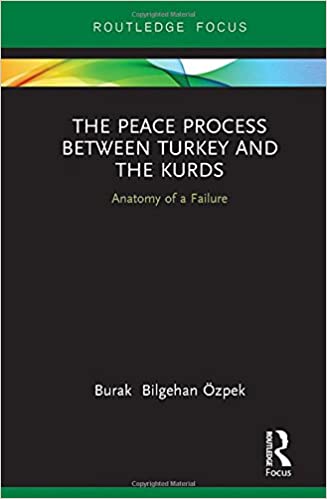 This pithy study examines why the Turkish-PKK peace process between January 2013 and July 2015 failed. An Introduction surveys the multitude of problems involved since previously “discussing the Kurdish question on a political basis has been viewed as an attempt to justify the aims of the PKK, and those who criticize the official line ... have been criminalized on grounds of treason” (p. 2).

Because historically Turkish governments had only used the military/security approach and/or the Kurdish issue as an instrument against domestic opponents, Chapter 1 aptly asks if the attempt at a peace process was only a deviation. After all, “the founders of the [Turkish] republic opted for building a nation-state, which did not allow the society to be defined as ethnically plural” (p. 7). Turkey looked upon projects to promote Kurdish interests as tribal and reactionary. The authorities also viewed the Kurdish question as an economic one resulting from Kurdish underdevelopment. Furthermore, Kurdish movements were framed as puppets of foreign enemies seeking to destabilize Turkey. Thus, “political goals of the Kurdish movements were ignored and demonized. ... Political parties refrained from suggesting comprehensive peace plans to solve this problem due to the fear of violating the security architecture of Turkey” (p. 8).

In addition, defining “the Kurdish question as a security issue might also be related to the strategies of the domestic political actors’ survival game in Ankara” (p. 8). Contending Turkish elites saw their opponents as using the Kurdish question “as a step toward domination of the political space. ... [Furthermore], the Kurdish question was an efficient and useful tool in the hands of the military to keep their position in the system and intervene in politics” (p. 9).

For his part, Abdullah Ocalan, the founder and still leader of the Kurdistan Workers Party (PKK) despite his imprisonment by Turkey since February 1999, reinforced these negative parameters. “Ocalan’s strategy was oxymoronic because the PKK’s strategy — based on extremist violence, including terrorist acts — undermined the influence of political parties, even government parties, on the decision-making process” (p. 16). Given these specifics, the author accurately concludes that the peace process was a deviation from Turkey’s earlier policy on the Kurdish issue.

Chapter 2 deals with various general theories of violence and peace found in the academic literature and uses them to seek insights into the Turkish-PKK peace process. Although noting that “governments are inclined to define rebel groups as terrorist organizations in order to justify their policies and downgrade the political dimension of the violence” (p. 26), the author boldly and accurately concludes “that the struggle between the Turkish state and the PKK could be called a civil war as opposed to fighting against terrorism” (p. 22). The Turkish government and its U.S. and EU allies officially disagree, as all three classify the PKK as a terrorist organization. However, since one does not usually negotiate with terrorists, this reviewer has long recommended that the PKK should be removed from the terrorist list and then challenged to negotiate responsibly. After all, the United States has treated the Syrian Kurdish Democratic Union Party/Peoples Defense Units (PYD/YPG) — an affiliate of the PKK — as an ally in the struggle against the Islamic State of Iraq and Syria (ISIS).

Chapter 3 asks, “Why did the peace process fail,” and thus constitutes the heart of Özpek’s study. He lists several factors, culminating in the parliamentary elections of June 7, 2015, which saw Turkish President Recep Tayyip Erdogan’s Justice and Development Party (AKP) lose its governing majority largely because the pro-Kurdish Peoples Democratic Party (HDP) managed to exceed the 10 percent threshold to enter parliament and thus deny seats that would have maintained the AKP’s majority. To regain its majority, “the AKP radically changed its attitude towards the Kurdish question and followed a nationalist and militarist agenda” (p. 49). As Özpek argues, “Such a dramatic U-turn on the ‘peace process’ attracted the sympathy of the [Turkish] nationalist voters and brought a clear victory for the AKP in the snap elections” (p. 38) that followed on November 1, 2015. However, Erdogan’s victory was at the cost of renewing the armed struggle against the PKK.

Other factors that help explain the failure of the peace process include the Gezi Park protests. These were major nationwide antigovernment riots in Turkey against Erdogan’s AKP that began on May 27, 2013, in response to government plans to replace the central park in Istanbul with Ottoman-era military barracks. The denial of their right to protest and the violence used by the police touched a nerve, and a wave of antigovernment demonstrations swept across Turkey that lasted for several months. Although the Kurds played only a minor role in this event, “it has become apparent since the Gezi protests ... that Erdogan has a limited view of democracy. He regards it as restricted to the right to vote, while excluding the other conditions of democracy such as freedom of the press, freedom of expression, freedom of association and the right to protest” (p. 41). Similarly, in an incident not mentioned by Özpek, Erdogan once infamously declared that “democracy is like a train; you get off once you have reached your [real] destination” (“Destination ‘Great Muslim Democracy’: Time to Get off the Train,” Hurriyet Daily News). In other words, one can use democratic means to achieve other goals.

Furthermore, Erdogan’s “persistence to put the presidential system forward [as an alternative to the parliamentary system and] as a pre-condition for the continuation of the ‘peace process,’ made members of the Kurdish political movement uncomfortable” (p. 37). Selahattin Demirtas, the co-chair of the HDP, in an initiative Özpek does not mention, probably made a strategic error by declaring that Erdogan would never achieve his ambition of becoming a powerful executive president. The HDP leader, possibly alluding to the required three repetitions of the traditional Islamic formula for divorce, three times declared: “Mr. Recep Tayyip Erdogan, you will never be able to be the head of the nation as long as the HDP exists and as long as the HDP people are on this soil. ... We will not make you the president” (Hurriyet Daily News, March 17, 2015).

This unwise stand against Erdogan’s ambitions clearly helped to provoke the Turkish leader’s anti-Kurdish reaction. As Özpek concludes, “Erdogan’s bid for an à la turca presidential system has been evaluated as movement toward an unpredictable and personalistic rule with popular support instead of a quest for an institutional democracy by his opponents” (p. 41). Furthermore, “the Kurds have legitimately questioned whether Erdogan as absolute ruler would be willing to make any concessions to the Kurds. In other words, they viewed the presidential system, which would make Erdogan free from any kind of checks and balances, as a threat undermining the ‘peace process’” (p. 47). As Özpek concludes, “The ‘peace process’ failed and conflict recommenced because Erdogan’s bid for a presidential system with full executive powers did not overlap with the PKK-led Kurdish movement’s demands for constitutional guarantees” (p. 49).

In addition, Erdogan’s willingness to stand by idly just across the border and watch ISIS try to exterminate the Syrian Kurds in Kobane from September 2013 to January 2015 led to Kurdish protests in some Turkish cities, during which more than 40 people were killed. Finally, Erdogan’s opposition to “the Dolmabahçe Protocol, setting the conceptual and methodological framework of the ‘peace process,’ concluded and declared by the AKP government and the pro-Kurdish HDP deputies on 28 February 2015 ... nullified the AKP’s signature and the ‘peace process’ stopped” (p. 48).

As for the PKK, its ill-timed “call for self-rule zones in urban districts across the southeast of Turkey in August 2015 moved the conflict from rural areas into city centers. Thousands of civilians were caught between two fires ... and cities turned into battlegrounds for the Turkish security forces and the PKK” (p. 50).

The final two short chapters elaborate on these reasons the peace process failed, while an appendix presents a detailed “Chronology of the peace process.” Özpek’s study concludes with a short index, while a bibliography is implied by the endnotes to each chapter. The author is an associate professor in the Department of Political Science and International Relations at TOBB University of Economics and Technology in Ankara. His book is well written and will interest students, scholars, government officials and the interested lay public.