The Palestinian Authority in the West Bank: The Theatrics Of Woeful Statecraft 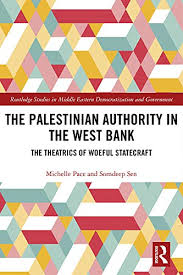 The 25th anniversary of the Oslo Accords saw a number of reflections and analyses on the political and economic impacts the agreement had on Palestinian life and land. Some praised the efforts of the last several decades, while many bemoaned the lack of progress. One policy roundup noted that, after a quarter century, a sovereign Palestinian state remains out of reach while Israel’s settler-colonial project had significantly expanded. The Palestinian Policy Network, Al-Shabaka, put forward several policy analyses concluding that “Palestinians can only achieve their basic political, civil, and human rights by reversing the Accords’ detrimental effects on the Palestinian struggle and rebuilding consensus around their national goal” (https://al-shabaka.org/focuses/focus-on-25-years-of-oslo/).

How and why do so many participate in the PA’s “theatrics of the state,” a state that does not exist? “What happens to the form and conduct of the Palestinian liberation struggle that aspires for the real state but remains burdened by the task of performing the state in its imitation form?” (p. 3). Instead of taking an approach that sees state-building as a primarily technical intervention into the political (and economic) worlds of Palestinians, Pace and Sen aim to reveal the violence written into institutions like the PA. Its physical violence is seen in the ways the PA securitizes political life in occupied Palestine. Its symbolic violence can be observed in the “splits” it presents to stateless Palestinians, as they participate in state-like theatrics that offer to bring them closer to a state while dealing with the realization that it will never arrive. This “split” describes a core premise of the book: a Palestinian state does not exist, and yet an image of the state is performed by multiple actors.

As Pace and Sen survey the social, political and economic elements of the discourse and institutions that have been articulated over the past decades, they question whether a Palestinian state was ever the goal: “The Oslo Accords were never meant to result in a lasting peace and the PA was never designed to transform into a sovereign state” (p. 6). Indeed, the PA was never conceived to address, let alone dismantle, the settler-colonial condition.1 Yet, Pace and Sen also observe, the PA still exists. Why? This question is central to Pace and Sen’s book. As they put it, “We consider the PA akin to a theater of statecraft in the occupied Palestinian territories. And, just like any theatrical performance, here too there are a multiplicity of actors who play their particular roles on stage” (p. 6).

Pace and Sen observe that these theatrics are at play due to the emergence of a “fuzzy state” that “does not present any clarity in terms of how the PA (and its statecraft) ‘fits’ on the trajectory of the Palestinian national struggle or how it contributes to ... Palestinian sovereign statehood” (p. 8). This fuzziness allows a variety of actors to create their own meaning about the PA and their relationship to it. It allows the Israeli settler to continue to deny the presence of Palestinians while denying them their “Palestinian-ness.” For Pace and Sen, “its ‘fuzzy’ nature also ensures that those in its vicinity or those under its rule are somehow able to inscribe their own meaning to the notion of the state and to rationalize their active or passive participation in its operation” (p. 8).

Pace and Sen spend the bulk of their book exploring four of the players, or “cohorts of actors,” who perform in the PA’s theater of statecraft. First are the international stakeholders. Primarily interviewing European diplomatic and donor representatives, they find a liberal peace-building agenda defined by the “two-state solution” and “good governance” agendas that envision and perform a technocratic and liberal state. Identifying the histories, contours and contexts of these stakeholders, Pace and Sen conclude that these actors play the part because, as funders of the PA, it allows them to “cultivate a specific identity vis-à-vis their desired role in the Israeli-Palestinian ‘conflict’” (p. 13). The result is that these international actors “discursively and materially continue to set limits for and block Palestinian self-determination under the banner of supporting peace and a Palestinian ‘state’” (p. 30), continuing the trajectory of 19th- and 20th-century European colonialism.

Second are those who actually work for the PA. These actors contend with its “stylized statecraft,” remaining fully aware “of their own statelessness and the futility of their professional duties” (p. 13). While they act as functionaries of a state, their actual statelessness continues, exacerbating the contradictions and anxieties that accompany performative acts that are doing nothing to bring about a state (p. 33). Forced to navigate their professional and personal commitments, PA workers’ performance is defined by anxiety, “a performance that ‘sticks’ to a script while cognizant of the script’s fallacies but nonetheless persists because, without it, the fallacies of that which is being performed will be revealed” (p. 14).

Third are those from Palestinian civil-society organizations. Pace and Sen provide a helpful overview of the development of Palestinian NGOs and the impact of the establishment of the PA on Palestinian civil society. For example, these organizations were once a “bastion of the Palestinian national struggle” before being appropriated into the theater of statecraft (p. 14). One way that the proliferation of NGOs has arguably transformed civil society in occupied Palestine is through its demobilization away from national struggle. “Donors ... de-politicized NGOs in the oPt [occupied Palestinian territories] through the introduction of a language and vocabulary that assesses humanitarian problems faced by Palestinians as problems of development rather than looking at the occupation and the ensuing politics of resource (land, water, etc.) management and allocation” (p. 55). In this context, Pace and Sen conclude that, regardless of whether they criticize the PA or not (and there are many that do), “their conduct is shaped by the theater as they defy the PA or stay mute in their criticism, fearing retribution” (p. 14).

The final cohort of actors are Palestinian activists critical of the PA. Pace and Sen begin with the recognition that these players are often the primary targets of censorship and repression, with terrible consequences (in some cases detention and torture) for those who would publicly oppose the PA. And yet, Pace and Sen observe, Palestinian activists who are victims of the PA’s violence are also “absorbed by the theater as they come to display the extent to which the PA (and its theatrics) enjoys political prominence in the occupied West Bank” (p. 14). Pace and Sen argue that these activists “become unwilling participants who, through the performative acts of being censured, and in their very being, become personifications of the (often, tyrannical) dominance of the theater of statecraft as the ‘approved’ (by local and global stakeholders) brand of political conduct in the oPt” (p. 81).

On this last point, Pace and Sen not only identify the ironies and contradictions in this theater but offer critical insights into the motivations of these actors, revealing the more intricate ways power is expressed and resisted.2 This relates to their conclusion that — since “Palestinians are often relegated to the sidelines of their own ‘story’” (p. 15) — acknowledging and giving attention to the way Palestinians are (and have been) already telling their own story offers a step toward a “justice-based approach” that is concerned not so much with building the right institutions (especially the state) but with securing Palestinians’ “right to have rights” (p. 15).

In this compelling study of the theater of statecraft in occupied Palestine, Pace and Sen make the case that these theatrics are ultimately not concerned with Palestinian national aspirations. The “fuzziness” of the state it projects only serves “to obstruct any possibility of the PA contributing to Palestinian sovereign statehood.” Without a clear path to sovereignty, it “further serves Israel’s settler colonialism that aims to deny Palestinians their Palestinian-ness and their right to have rights” (p. 83). It is this question of sovereignty that has been consistently side-stepped throughout the Oslo era by refusing to address the underlying political context of Israel’s settler colonialism. In this depoliticized reformulation, political and economic interventions in occupied Palestine become a technical matter. “The state, in its fuzziness, becomes a matter of technocracy and simply a concern for the establishment of its institutions and bureaucracies that in the end make the PA look like a state” (p. 85). What gets lost in this technocratic focus are Palestinians’ national aspirations, meant to be realized through a state and now obstructed because of the theatrics of statehood in occupied Palestine: “a state framed as a technocratic project ... placed outside of the scope of the politics (of Israeli settler colonialism) that has rendered Palestinians a stateless and rightless population” (p. 85). Giving attention to the right to have rights is appropriate, not least because of its resonance with Palestinian civil-society efforts to advance a rights-based approach with the call for Boycott, Divestment, and Sanctions (BDS) 15 years ago.

Pace and Sen’s exploration of the “theatrics of the state” is a rich and engaging conversation with implications not only for the particular expressions of this in the PA and occupied Palestine but for political theory generally. By interrogating the state as the object or the end of politics, it destabilizes the centrality of the state in our political imaginations. This matters because the state-building imperative that Oslo required has sidelined other critical concerns and political goals. A proper consideration of the state and state-building, Pace and Sen rightly argue, foregrounds the goal of securing Palestinian rights. The critical distinction is that the purpose of the state and state-building should not be seen as a means of preventing Palestinians from “devolving into anarchy” but rather as a focus concerned with justice for Palestinians. This prompts questions such as who is the state for? And for whom has the state never been?

This brings to mind the experience of dispossessed and displaced Palestinians. Though the experience of Palestinian refugees does not play heavily into Pace and Sen’s study, the implications are there, not least in terms of how the figure of the refugee and migrant continues to be a foil for the state and its claims to sovereignty. This is why the state tries to erase them or turn them into a threat. This is observed across the globe, from Palestine to the United States to Europe to Myanmar and Bangladesh, not only because of the issue of the state and its (racialized and gendered) claims to sovereignty. There is a social and political economy that necessitates the simultaneous push and pull of the migrant and the refugee. In addition to its critical evaluation of Oslo and the PA, this book raises important questions about the purpose and function of the state altogether.