Saudi, Inc.: The Arabian Kingdom's Pursuit of Profit and Power 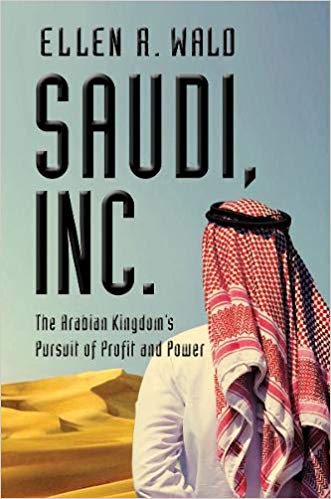 It is no exaggeration to say that the kingdom of Saudi Arabia owes its wealth, power and international stature for the most part to the vast oil resources lying beneath its deserts and waters. The key to their miraculous discovery and skillful exploitation was a remarkable joint venture of four American companies that put together the Arabian American Oil Company (Aramco), eventually turning the kingdom into a world financial and energy powerhouse. It is also the kingpin of the Organization of Petroleum Exporting Countries (OPEC), a cartel of 15 producers affecting profoundly the supply and price of oil worldwide.

Ellen Wald's Saudi, Inc. recounts in great detail how the Saudis skillfully dealt with Aramco's American partners over decades of simultaneous close cooperation and periodic conflict on the way to a complete Saudi takeover. This was accomplished through successive buyouts rather than outright nationalization, as Iraq, Iran and Libya had done in dealing with American and British oil companies operating in their countries.

This nonconfrontational approach paid off handsomely for the Saudis, as Wald recounts. It preserved the American-Saudi relationship that allowed the kingdom to access, in turn, the knowledge, expertise and markets of the American oil giants — Standard Oil of California (later Chevron), Texaco, Standard Oil of New Jersey (later Exxon) and Socony (later Mobil).

The end result was the creation of the world's biggest state oil company, capable of producing 12 million barrels a day while maintaining recoverable reserves of over 260 billion barrels and establishing its role as the world's central bank of oil. Even after the Saudi government completed its takeover of Aramco in 1980, an American continued to serve as its chief executive officer for the next eight years, and it remained registered as a Delaware-based company. Exactly how much the Saudis paid either in cash or kind (oil) remains a secret even to this day, despite Wald's best efforts to find out. (She settles on outside estimates of around $2 billion.)

Her book makes for particularly timely reading as Saudi Arabia today weighs whether and when to privatize a share of this centerpiece of the kingdom's economy in order to raise $100 billion to diversify away from its nearly total dependence on Aramco oil. One issue for potential foreign investors is whether the market will dictate Saudi production and price levels or the personal needs of the royal family and politics — Saudi policy toward OPEC, Iran and the United States.

As Wald recounts, Aramco (renamed Saudi Aramco in 1988) has not only produced huge profits and power for the House of Saud. It has also served as the main engine for the kingdom's drive to modernize, undertaking the building of much of its initial infrastructure (particularly in the Eastern Province, the heart of its oil industry) as well as schools, hospitals and a university. It also has sent hundreds of Saudis to American universities for technical training.

Its headquarters and campus outside Dhahran, where its senior officials live, was the first in the kingdom to allow men and women to work together in the same workplace. Women have been allowed to drive cars inside the Aramco "city" for decades, while only this June did the government lift the nationwide ban on their doing so. Wald rightfully describes Aramco as the government's favorite fallback institution to launch and run other key royal projects like the King Abdullah University of Science and Technology, the first in the kingdom to allow gender mixing among students.

The core of Wald's book, however, is a recounting of the interaction between Aramco's top executives and senior Saudi government officials acting most of the time on behalf of one or another king seeking to squeeze an ever-greater share out of Aramco's ever-growing profits into the royal coffers.

What is particularly fascinating in her account is how some of these nonroyal bureaucrats became powerful enough on their own to pursue independent agendas and policies. An early example was Abdullah Tariki, the American-educated co-founder of OPEC in 1960, whose preference for outright nationalization of Aramco earned him the nickname the "Red Sheikh." It also caused his fall from royal grace and dismissal. Or the world- renowned Saudi oil minister from 1961 to 1986, Sheikh Zaki Yamani, whose gamble to restore Saudi control over OPEC in the mid-1980s by flooding the market with cheap Saudi oil caused a royal financial crisis. This led to his unseemly dismissal, about which he learned while watching the Saudi news one night at his home in Riyadh.

One shortcoming of her analysis — which Wald readily acknowledges at the end of the book — is the absence of written Saudi records, or internal Aramco ones, accessible to outside researchers. This has restricted her ability to present a fuller picture of the internal debates and machinations of either the Saudis or Aramco's American partners. She has had to rely on the published memoirs, primarily of U.S. ambassadors to the kingdom, and of Ali al-Naimi, a product of Aramco who rose through its ranks to serve as Saudi oil minister for 21 years until he retired in 2016. She has also depended heavily on State Department records for reports of the royal viewpoint, rarely explicated by the royals themselves.

Still, Wald has assembled a good account of the steps taken by Saudi kings and Aramco's American partners as they struggled to maintain their cooperation in the face of the Saudi drive to take over 100 percent control of the company. One of her main theses is that the Saudi side always had a much better understanding of American machinations than senior Aramco officials realized. The prime example here was Aramco's tactic of minimizing tax payments to the Saudi government in order to maximize the profits of its four American parent companies by manipulating the so-called "posted price" for a barrel of oil. For years, this was set by Aramco, not the Saudi government, to determine the amount of taxes it paid to the Saudi government.

Saudi negotiators discovered Aramco's American owners were selling Saudi oil for a price considerably above the posted one, thus shorting the kingdom on its tax payments. They began pressing for higher taxes and hinting they wanted a slice of Aramco. The Americans dragged their feet but did begin paying higher taxes, though they held on to setting the posted price. All this changed with the end of American self-sufficiency in oil at the start of the 1970s and a Saudi-led Arab oil boycott of the United States to punish Washington for its support of Israel during the 1973 war.

At that point, Saudi Arabia also joined other OPEC members in upending the posted- price system by announcing that henceforth the organization itself would set the cost of a barrel of oil. Prices soared, but so did the profits of American oil companies even as they paid far more taxes to the Saudi government. In the end, both the Saudi government and American oil companies gained at the expense of American consumers. In the end, however, the four American Aramco partners were bought out.

Throughout her book, Wald frequently examines how and when oil prices and politics mixed both inside Saudi Arabia and in its policy toward OPEC, as the kingdom rose to become the world's swing producer. At times, Saudi Arabia artificially lowered or increased its production to win its fights against other OPEC members as much as to meet world demand for more oil.

As for Saudi Aramco's relations with the royal family, Wald never examines the question of how many billions of dollars are siphoned off each year to pay for its personal needs and pleasures. Also neglected are the special consignments of oil the king awards as gifts or at reduced prices to help friends, such as Pakistan and Egypt, in times of financial distress. Nor does she mention the special oil fund established in the 1990s to raise money to help finance the kingdom's campaign to spread worldwide its ultra- conservative brand of Islam known as Wahhabism.

Another example of how Saudi Arabia has sometimes mixed oil prices and politics has been its effort to maintain good relations with the United States, its most important foreign ally. The former Saudi ambassador to the United States, Prince Bandar bin Sultan, once said that American presidents habitually pleaded with Saudi kings to keep oil prices low during presidential elections so that high gasoline prices would not become an issue. President Trump even pressed King Salman to pump more during the 2018 congressional elections to help prevent Democrats from wresting control of Congress away from Republicans. The king belatedly complied, but too late to lower prices by the Nov. 6 elections.

Despite these lacunae, Wald has produced a very readable and lively account of the origins and development of the special relationship between Saudi Arabia and American oil companies that came to bind the two countries together economically and politically. It also gave rise to what many experts consider the most professionally run and economically successful state oil company in the world today.