Making the Arab World: Nasser, Qutb and the Clash that Shaped the Middle East 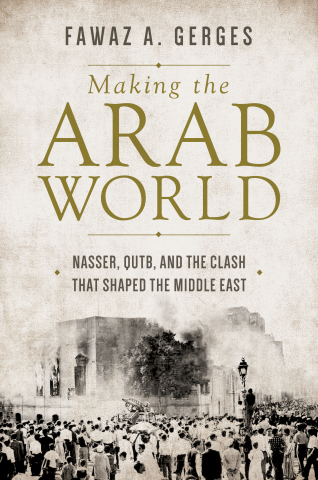 Fawaz A. Gerges has delivered an ambitious and authoritative analysis of the ideological clashes of the nationalist and Islamist movements of the Arab world. By focusing on the two main antagonists emerging from the military coup of 1952 — Gamal Abdel Nasser and Sayyid Qutb — Gerges reveals the stunning panorama of the huge battle waged by those whom he describes as the most influential figures of the twentieth-century Arab world. Few would actually venture to add fresh studies to a field full of investigations of Egypt's leadership role in the Arab region. Indeed, not since Richard P. Mitchell's The Society of the Muslim Brothers and Nazih Ayubi's equally definitive Political Islam has the scholarly community been treated to such a comprehensive and thought-provoking work. The book also provides a summation of the sociopolitical and economic trends characterizing Egypt's transformation from a British colony to the unchallenged leader of the Arab world. What facilitates this tracking of long-term trends is the author's patient collation of the views and comments of leading figures in this drama.

After describing the "Liberal Age," with its hopeful political expressions and ambitious development plans, Gerges focuses on the appearance of underground politics as a necessary strategy of the newly urbanized classes seeking to confront the lingering colonial presence on their soil. He then traces the rise of the Revolutionary Command Council (RCC), as well as the equally anti-colonial Islamist movement of Hassan al-Banna to the same underground political culture of defiance and resistance. This produced a three-way conflict featuring the palace, the officers and the Islamists as the British sought to manipulate Egypt's fragile democratic institutions to their advantage. As a background to all this, the Palestine War of 1948 galvanized the officers and Islamists alike. The officers viewed this debacle as symptomatic of the country's fragile strategic security doctrine, while the Islamists viewed it as evidence of the nation's loss of faith.

The author's interviews with surviving members of the officer class attempt to answer the question of how and why the two movements cooperated and then collided. Among his interlocutors are Khaled Mohieddin, leftist founder of Tagamu; Sami Sharaf, gatekeeper to Nasser's office; and the ubiquitous authority on this era, as well as the guardian, if not creator, of Nasser's legacy, Mohamed Hassanein Heikal. The interviews demonstrate Nasser's obsession with the Islamic current, despite his success in pragmatically aligning his regime with al-Azhar. This prompted Aminah al-Said to criticize his reluctance to wage a pro-feminist Jihad against this stronghold of Islamic conservatism. Yet Mohieddin repeatedly emphasized that Nasser was more fearful of the Egyptian left than the Islamists on the right. Gerges asserts that this was no ideological struggle, since Nasser knew the depth of the masses' Islamic attachment. His anti-Ikhwan Muslimun (Muslim Brotherhood) struggle was never that of an Ataturk or Bourguiba, who were hell-bent on transforming their societies into replicas of the West.

The author examines the failure of Nasser's pan-Arab project by examining its beliefs. Gerges insists that Nasser used this doctrine to maximize Egypt's strategic depth in the Sinai region and was not as interested in Arab unity as he was favorable to a semblance of regional solidarity. Nasser emerges as a pragmatist, not an ideologue, unlike Michel Aflaq or Sati al-Husri, who created a leader-centered movement. But how to explain the blunder of the Yemeni War or Syria's defection from the United Arab Republic, caused by Abd al-Karim Nahlawi, an obscure lieutenant-colonel? Nasser's leadership survived, it is argued, simply because he had no internal rivals other than Mohamed Naguib. Egyptian writers, however, often refer to Abd al-Hakim Amer as Nasser's nemesis prior to his official disgrace following the 1967 War.

Among the most informative treatments in this book is the investgation of the life-story and intellectual evolution of Qutb, referred to by his acolytes as al-shahid al-hayy (the living martyr), and by the author as "the accidental Islamist." It is the underlying premise of this study that modern Egypt was shaped by the struggle of the Nasser-Qutb Janus of Egyptian nationalism. Gerges succeeds brilliantly in outlining the earlier collaboration and later divergence of views of these two, clarifying that al-Banna never proposed divorcing Islam from Arab nationalism. The struggle over Egypt's leadership intensified after the 1952 coup, with each side claiming strong anti-colonial credentials and an even stronger commitment to issues of social justice. Nasser was vilified as someone who had reneged on his baya (oath of allegiance) to the Supreme Guide by refusing to hand over the reins of power to his erstwhile supporters in the Islamist underground.

The unacknowledged homogeneity of views within the two camps was a natural outcome of their descent from the common ranks of the new urban petite bourgeoisie. Sharaf claimed the officers generally believed that the Supreme Guide, Hassan Hudaybi, was trying to hijack the revolution. As Qutb's propaganda war heightened, Nasser became obsessed with this unanticipated challenge to the RCC and Hudaybi's dalliance with Naguib, culminating in Mahmud Abdel Latif's attempt on his life. Qutb, as the head of the Ikhwan's propaganda department, utilized all his literary skills to vilify Nasser as a treasonous dictator and a secret Jew. The threat became real as the officers discovered Qutb's al-Nizam al-Sirri (secret apparatus). Nasser's jails not only inflicted torture and humiliation on the Ikhwan, but also became training grounds for an entire generation of Islamist radicals, including feminists such as the formidable organizer Zeinab al-Ghazzali.

Other parallels between the two antagonists emerged, such as a remarkable capacity for adaptation. Nasser — who, according to Heikal, "lacked a revolutionary map" before seizing power — learned how to wage an ideological campaign equating liberal capitalist democracy with colonialism, before establishing an authoritarian regime to enact his reforms. Similarly, Qutb speedily adapted to his new role as the leader of the revolutionary wing of his movement by embracing the concepts of hakimiyya (God's sovereignty) and takfir (excommunicating other Muslims) from the Indian scholars Mawdudi and Nadhawi. Qutb latched on to the injunctions of Ibn Taymiyya, who made the shedding of Muslim blood (clearly prohibited in the Quran) as fardh ayn, a duty incumbent on every Muslim. Thus, as Nasser was searching for a role to fill, clarified in Philosophy of the Revolution, so was Qutb — following the unraveling of his secular liberal career.

Qutb actually lacked attachment to al-Azhar after he joined the reformist teachers-training school Dar al-Ulum. Although consumed with what he saw as the moral decline of the United States, his two seminal works, Maalem fi al-Tariq (Signposts Along the Way) and Fi Thilal al-Quran (Under the Shade of the Quran) were written in jail. Qutb apparently was more despondent over the lack of interest of his mentor, Abbas Mahmoud al-Aqqad, in promoting his literary career than anything else. Qutb, while in jail, proposed violence as a tool against the oppressive state, distinguishing between genuine and insincere Muslims. Gerges adds that the battle of the 1950s and 1960s materialized as a dispute over the definition of Egyptian national identity at a time of conscious Muslim alienation from Western culture. While Qutb called for a return to asala (authenticity) led by an Islamic talia (vanguard), the Islamist old guard continued to preach the virtues of gradualism and the impracticality, if not illegitimacy, of violent seizure of power. Arguing that creating the ideal Islamic state may require entering into unsavory alliances, they honed tactics later utilized during the Sadat and Mubarak periods. Nasser's legacy, however, was overtaken not by radical Islamists but by Sadat, one of his inner circle. Even though the older Islamists learned the tactics of co-optation and manipulation in order to grasp the nettlesome reins of power, they and younger recruits never expressed any pangs of self-doubt. Pan-Arab public intellectuals, however, agonized over the failure of the national project, attributing it to excessive attachment to the Islamic heritage. And as the mirage of political power expanded and contracted by Sadat's endorsement of Gamaa Islamiyya on university campuses and his eventual crackdown on Islamist opposition to his Camp David diplomacy, the Ikhwan were forced to adapt. The Mubarak regime's tolerance for limited Islamist participation in politics afforded new opportunities for joining the Tagamuu and Wafd parties. But the Brotherhood remained excluded from power due to the deepening chasm separating the younger reform wing from the old guard.

Failure to achieve political ascendancy resulted from resistance to such modernizing steps as opening the organization to women and developing a modern definition of citizenship that would admit Christians as well. This paralysis forced the Ikhwan to stall during the early phase of the Arab Spring, eventually accepting the invitation of the Supreme Council of the Armed Forces (SCAF) to stabilize the country by fielding its own presidential candidate. This turned out to be the lackluster Mohamed Morsi, who ruled briefly while the head of the group, Mohamed Badie, and its richest financier, Khairat al-Shater, continued to exercise control. Gerges dwells on the puzzle of a movement enjoying vast popular support, control of professional syndicates and successful management of a vast social-welfare network yet unable to devise a meaningful response to the revolutionary crisis.

It would be difficult to argue with any part of this study or to ignore its breadth, thoughtful analysis or impeccable objectivity. Professor Gerges has delivered a tour de force of massive proportions that absorbed him for more than two decades. The main value of this study remains its juxtaposing of the competing ideologies of the Arab world and its clashing revolutionary traditions in order to provide a clear view of its modern dilemmas. He accomplishes this by providing an array of interviews, as well as rare autobiographical accounts, studies and reports. Much of the material pertaining to the decline and inner conflicts of the Islamist movement is accessed here for the first time. The work is an unparalleled contribution to our understanding of the world of the Arabs following the loss of Palestine, and the enduring injustices and humiliations of the 1967 War. Although the author claims the methodology of British historian Eric Hobsbawm as the inspiration for his approach of emphasizing patterns and cycles, it is probably more accurate to cite the Annales French school of historical writing, with its concern for continuity, rather than disruptions, in history.

I have only two reservations. As fascinating as the life-story of Qutb is, he cannot be canonized as one of the great figures of the modern period. There are many ideologues, public intellectuals, political revolutionaries, feminist pioneers and party stalwarts more deserving of this rank. And, as illuminating as this work is, it still leaves the reader with many questions about pan-Arabism and its fallen heroes. Hopefully, this will be Professor Gerges's next undertaking.