New Capitalism in Turkey: The Relationship Between Politics, Religion and Business 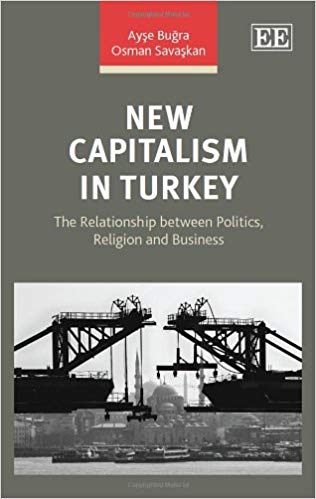 This book examines the developments that have transformed the relationship between government and business in post-1980 Turkey. Buğra and Savaşkan locate their discussion within the historicaly determined domestic and global contexts that, they argue, have brought a new form of capitalism to Turkey. Accordingly, vast institutional reforms have changed what Karl Polayi calls "the place of the economy" everywhere in the world. The welfare state practices of the developed world and the developmental policies of the developing world as well as the command economics of the socialist countries have faded away in the face of pro-market institutional changes. These were not merely economic and institutional but affected the political regimes. They were also accompanied by cultural changes that brought religion to the surface, creating new sources of tension and alliances among different groups. Buğra and Savaşkan explain that this transformation was particularly intense in the case of Turkey, due to the rise of the Islamic politics that challenged the secularist character of the regime. The Justice and Development Party (Adalet ve Kalkınma Partisi, AKP) came to power in 2002 within this context and has played a crucial role in transforming government-business relations, creating new alliances and new sources of tension. Drawing insights from a historical institutionalist framework, this book explains the intricacies of capitalist development in Turkey and highlighting its global sources.

The examination of the AKP's political economy since 2002 highlights a number of significant points essential to understanding the new capitalism in Turkey. First, the analysis in the book demonstrates that "religion plays the role of a network resource for building trust in economic transactions between market participants and in their dealings with the government" (p. 17). These networks include some actors while excluding others. Thus, the authors explain, religion fomented a class conflict between those who rose to power in the pre-1980 period and those who ascended later on thanks to political Islam. The latter established a clientelist relationship with the AKP. This has made religion a source of deep cleavage in the business environment.

Buğra and Savaşkan do not agree with the commonly held view that the rise of political Islam has been carried out by those who were "formerly oppressed" and who now assert themselves in the public sphere. This argument is based on a particular paradigm critical of the cultural politics of modernizing states but "not used with reference to the role of the myriad governmental groups and NGOs in influencing the place of the sacred in individual lives and affecting the interpretations of religion and manifestations of religiosity" (15). Buğra and Savaşkan also argue that this type of social engineering is precisely what is needed in the analysis of the rise of political Islam and how it manifests itself in the bussiness environment. Accordingly, the rise of Islamism is not due to these "formerly oppressed" segments of society, but to "incomplete secularization." Thus, the republican project of modernization and secularization had limited success; the examination of the education expenditures in the early republic demonstrates that they were quite limited, and radio reached only a small percentage of the population. As a result, the early republican modernizers could not "mobilize people around shared aspirations for a better life. Large segments of the population remained excluded from the economic benefits of modernization, and no significant change in the lifestyles of the majority could materialize" (p. 40). Thus, the authors argue, the religion-centered system of public morality continued to exist and "the separation of the state and religion remained incomplete" (p. 41).

The authors explain that the pro-market institutional changes, such as financial liberalization, labor market deregulation, the privatization of social services, and the lack of subsidies for the agricultural sector, did not lead to the shrinking role of the state in economy and society. On the contrary, the state continued to expand, interacting with private business people and NGOs at the national and local levels. This "blurring of boundaries" between the public and the private and between the state and the NGOs is particularly significant in the case of Turkey. Market-led reorientation of the economy during the 1990s proceeded without the necessary institutional structure and resulted in a series of economic crises in 1994, 1999 and 2001. When the latest crisis broke, the government decided to take action, adopting a series of regulatory mechanisms. Within this environment, the economic privileges of the local branches of the central government and municipalities increased. Small and medium-sized enterprises — like the big ones — also benefited from the new system. Business people who long had avoided taking explicit political positions became political actors (pp. 109-144). The book discusses relations between the AKP and TÜSİAD (Turkish Industrialists and Business Association, the oldest association, established in 1971) as well as the ones that emerged later, alongside the rise of political Islam: The Association of Independent Industrialists and Businessmen (MÜSİAD), the Association of Businessmen (ASKON) and the Turkish Confederation of Businessmen and Industrialists (TUSCON). These organizations are part of the new religious networks around the AKP government, reshaping the organizational discourse and strategies.

New Capitalism in Turkey is a theoretically nuanced and empirically rich book. Buğra and Savaşkan provide us with a fresh, detailed and annotated account of the changes taking place in the domain of political economy in Turkey. In doing so, they challenge many commonly-held assumptions about government-business relations, the intra-business relations, the secular-Islamic cleavage, and the political strategies and discourses of the main actors. The data sources of the book are also rich and include a wide range of primary sources, including the ones collected through fieldwork. This timely book should be a required reading for all students of Turkish politics.