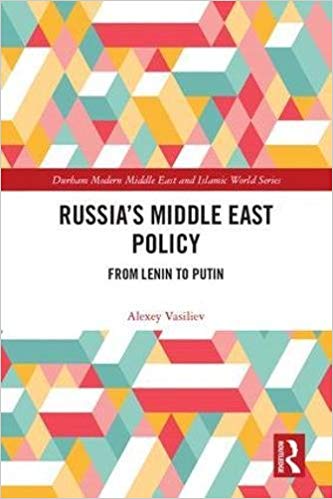 Russian scholar Alexei Vasiliev has been writing about Middle Eastern and African affairs since the early 1960s. He was a Pravda correspondent for over two decades before moving to the Institute of African Studies of the (first Soviet, then Russian) Academy of Sciences. He was the director of the Institute from 1992 to 2015, and has been its honorary president since 2015. This new book consists of an update of his 1993 book, Russian Policy in the Middle East: From Messianism to Pragmatism, plus new chapters on events since then: the "cursed nineties" (1990s), Putin's first decade (2000s), the Arab Spring era in general, and a chapter each on the conflict in Syria up to the 2015 Russian intervention and on the period since then.

Vasiliev is often scathingly critical of Soviet foreign policy toward the Middle East before Gorbachev for having been guided too much by Marxist ideology and not enough by Russian national interests. He is also highly critical of Gorbachev's and Yeltsin's foreign policies toward the region for vainly seeking to please America and the West instead of pursuing Moscow's own interests there. By contrast, his assessment of Putin's foreign policy toward the Middle East is very (though not completely) positive — primarily because he sees Putin as being the one leader who prioritizes the pursuit of Russian national interests and has no interest in messianic ideology, much less trying to please the West. By contrast, Vasiliev sees the United States since 9/11 as having pursued the messianic goal of spreading democracy by force, and that this largely explains America's failures in the region.

One of the unusual features of the book is that it includes transcripts of often quite lengthy interviews that the author had with knowledgeable (mainly) Russian sources including his former student who became Russia's deputy foreign minister, Mikhail Bogdanov, longtime Russian Middle East hand Vitaly Naumkin, and former Russian ambassador to Kuwait, Turkey and Israel Petr Stegniy. These are especially useful for conveying the debates going on in Moscow as well as states of mind of decision-makers during key events. Often times, though, these interviews indicate that the reasons for certain decisions were often as opaque to these close Russian observers as they were to more distant Western ones.

I did notice one odd problem: several of the references in a section of the book devoted to Russian policy toward the Arabian Peninsula during the 2000s (pp. 373-75) are to sources published prior to the events described. The author clearly knows better, so this problem may have arisen during the editing stage. Other references that I checked were to appropriate sources, but I did not check each and every note in this very long, extensively annotated book.

Vasiliev strongly defends Russian support for Syria's Assad regime and does not pay sufficient attention to its brutality. He emphasizes, however, two points that critics of the Assad regime have not had an effective response to: 1) If Assad immediately steps down as so many in the West and the region have called for, his most likely replacement will be a jihadist regime; and 2) military assistance from the United States and others to the "moderate" Syrian opposition has all too often ended up in the hands of the jihadists.

Despite his defense of Russian support for Assad, Vasiliev notes in his conclusion that,

The exit strategy remains a challenge. Russia has been able to play a decisive role in Syria, but only in Syria. If we are realistic, we should accept in advance that, in general, Russia is incapable of occupying the leading position in the Near and Middle East, first of all, due to economic circumstances….Therefore, the desire to find common ground with the West remains an important vector of its policy (p. 516).

This is a remarkably sober assessment of Russia's prospects in the Middle East and quite different from that of all too many Western analysts who see Russia replacing America as the predominant power in this region.

While the story of Moscow's foreign policy toward the Middle East is generally well known thanks to the writings of many scholars and journalists, Vasiliev's book provides a wealth of detail and insight that make a close reading rewarding even for those most familiar with this subject. It is unfortunate that the book's massive cost will serve to limit how widely it is read (the book is available for lower than the publisher's retail price from Amazon and other sources, but is still quite expensive). Especially now that so many research institutes make even book-length studies downloadable for free, it is unfortunate that scholarly commercial presses such as Routledge often charge so much for books that compete with them for readership.