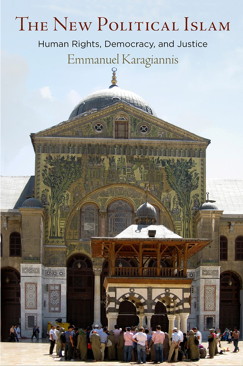 “Political Islam” is a constantly changing force in global politics. It is the term frequently used to designate movements that explicitly call for application of Islamic principles in modern political life. Analysts identified the rise of movements of Political Islam in the 1980s and some described the “failure of Political Islam” in the 1990s. Emmanuel Karagiannis, in The New Political Islam, examines the dynamics, in the twenty-first century, of the emergence of a new phase in its continuing evolution.

Karagiannis argues that “early political Islam was localist,” aiming at liberating a particular country from foreign or dictatorial rule (p. 6). The jihad in Afghanistan and the creation of al-Qaeda by the end of the 1980s signaled the next phase of Political Islam, as more globalist in vision and activism. Karagiannis contends in this book that “between the first generation of Islamist nationalists and the second generation of Islamist globalists stands now a new generation of Islamists” (p. 10) who create syntheses of global and local active Muslim consciousness. Using the concept of “glocal,” as developed by Roland Robertson, Karagiannis concludes that the new Political Islam is “the embodiment of a synthesis between global ideas and local realities” (p. x), making it “the epitome of glocalization” (p. 10). The “glocal” character of the new organizations and movements of contemporary Political Islam is a central theme for Karagiannis’s analysis of the diverse groups included in the category. He recognizes the great diversity among the groups, but argues that the local particularisms reflect the common glocal character of the new Political Islam.

The conceptual framework for Karagiannis’s analysis is presented in the preface and introduction, providing a clear outline for the book as a whole. Karagiannis identifies three types of agents for Political Islam: activists, politicians and militants. He then examines how these agents present their visions and messages to the public, using the concept of “framing” from social-movement theory. Central in this presentation is the concept of a master frame, which provides a set of symbols and visions with relatively broad popular resonance used in presentation of a movement’s message. Three master frames — human rights, democracy and justice — are the vehicles for presenting the messages of Political Islam.

The third style of the new Political Islam in Karagiannis’s analysis is Islamist militancy that articulates its visions and messages through the justice master frame. He presents this frame as embedded in Abrahamic monotheism, having “the potential to rally large segments of society behind Islamist militants” (p. 133). In discussing Shia groups (Chapter 5), he concentrates on Hizballah in Lebanon and the Mahdi army in Iraq, emphasizing the “glocal” nature of their militancy. He concludes that they “have adhered to a version of Islamism that has a global claim, while promoting a localized Shia identity” (p. 155). In his discussion of Sunni militants (Chapter 6), Karagiannis’s analysis of “Jihadi-Salafism” provides an interesting complement to his discussion of “electoral Salafism.” He notes the recent “localization” of Sunni Jihadi-Salafis, concluding that groups like ISIS and al-Nusra (in the al-Qaeda network) “have functioned as

Islamist glocalizers” and “have managed to adopt the global idea of justice and adapt it to local conditions” (p. 178).

Karagiannis provides a clear summary of his arguments in a useful final chapter, affirming his conclusion that “the new political Islam stands between global ideas and local realities. It is a dynamic manifestation of our glocalized world” (p.183). This position represents an important rejection of the common binary analysis that starts with the assumption that the “global” and the “local” are in conflict in contemporary politics and global affairs. While there is opposition to the global Westernizations of what some have called “McWorld,” the new Political Islam has its own globalizing dynamism.

In analytical methodology, Karagiannis tends to go beyond other important binary analytical frames, although he does not make the arguments explicitly. His study challenges the old binary in which “the blurring of politics and religion seems antimodern” (p. ix) and views “religious” movements as “traditional” and in opposition to “the modern.” However, in this study the old traditional-vs-modern binary does not fit an analysis in which the “rise of Islamism is a modern phenomenon” (p.180). None of the movements of Political Islam examined in this book can be considered “traditional” in message or structure. Instead, these movements are creating their own Muslim modernities. In this line of analysis, Karagiannis might find it apt to apply the concept of “multiple modernities” as developed by S. N. Eisenstadt (“The Reconstruction of Religious Arenas in the Framework of ‘Multiple Modernities,’” Millennium: Journal of International Studies 29, (No. 3, 2000).

Much has been written about Political Islam in recent years, and Karagiannis provides a useful addition to this library. His careful analysis of the “glocal” nature of the “new Political Islam” presents a distinctive framework for understanding the diversity within this major movement as well as its global manifestations. This well-organized study will be helpful for both the general reader and the specialist.