Lords of the Desert: Britain’s Struggle with America to Dominate the Middle East 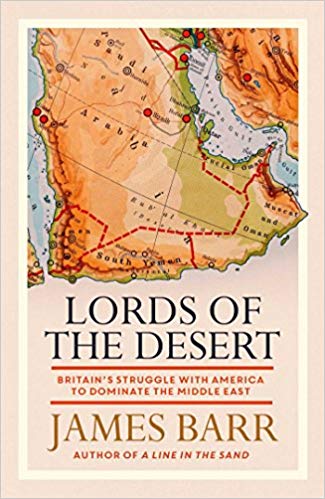 James Barr is acquiring an enviable reputation for an ability to pen narrative histories aimed at a popular audience that address the West’s involvement in shaping the politics of the Middle East during the 20th century. His first work, Setting the Desert on Fire, dealt with the Arab Revolt during WWI, and the second, A Line in the Sand, concerned the British and French efforts to redesign the political map of the Middle East following the collapse of the Ottoman Empire. In this, his third work, he aims to reconstruct the nature of the relations between the United States and the United Kingdom in that region from World War II till the latter’s withdrawal from the Persian Gulf in 1971. It is, to say the least, a great deal to cover, and he proffers a brisk gallop over it in 27 brief chapters. It is a retelling, more descriptive than analytic, replete with incidental detail and a focus on personalities that lends the work a somewhat gossipy character.

Barr’s key objective is to offer a corrective to what he considers a pernicious prevailing distortion in the understanding of the U.S.-UK relationship: that it was grounded in an overarching amity and unity of purpose, the so-called “special relationship.” Accordingly, the work aspires to chronicle the substantial tensions that infused Anglo-American relations. And, without question, Mr. Barr succeeds in highlighting a multitude of policy differences between the two as well as demonstrating the frustrations and distrust experienced by numerous political participants on each side. One could say that the British in the region thought they knew better; the Americans thought they could do better. Equally germane, he draws our attention to the fact that frictions over policy reflected differing and quite basic appraisals on how best to approach the emergent political landscape of the postwar world. Essentially the tale he tells is one component of a broad and critical mid-twentieth century shift in the hegemonic positions of the United States and Britain, with the former’s global stature waxing and the latter’s waning.

However, Mr. Barr wishes to go further with his insistence that the United States was, in fact, the UK’s primary enemy in the Middle East. (He commences his work by approvingly quoting Enoch Powell to this effect.) This is a startling assessment and one which the work itself is unable to substantiate.

The notion of a “special relationship” existing between the two has long been understood as the sort of rhetorical embellishment much beloved by political figures when speechifying (witness U.S. Secretary of State Mike Pompeo’s comments in London last May that “…the relationship is the beating heart of the free world”) rather than anything like a coherent idea reflecting reality. But to proffer the view of an essential enmity is to go to the other extreme. There were simply too many points of convergence, ongoing coordination and, of course, the financial assistance extended to the UK by the United States that traduce Mr. Barr’s reading of the relationship. It is undoubtedly true that while both the U.S. government and American public shared a reflexive distaste of empire — a reflex that was not necessarily based on anything like an objective assessment of the structure and variety of British hegemony — the U.S. government was more than willing to avail itself of the British position in the region if it was seen to serve U.S. goals. This fateful encounter between two global powers, the one in pursuit of position and prerogative and the other seeking to discern new ways to preserve those it historically possessed, demands a more nuanced reading. Mr. Barr too readily conflates differences in policy and perception with a U.S. intent to destroy.

Enoch Powell’s deep distress that what the British had created over many generations through ingenuity, talent, nerve, violence and sacrifice was unceremoniously being undone was not misplaced. But it seems equally true that the “enemy” of empire was not the United States but the increasingly volatile and fractious nature of the region itself. The old elites with whom and through whom the UK had established a regional preeminence were being cast off. Those coming to power were not interested in preserving the status quo. Besides, they had an abiding distrust of the British. The empire’s problems were amplified by its impoverishment, due to two global conflagrations within one generation and the deep divisions within the imperial apparatus about how to contend with its myriad pressing problems. The United States, for its part, refused to step in to sanction and offer unqualified support to the status quo; but that does not deserve the pejorative classification of enemy.

Despite such interpretive reservations, Mr. Barr must be applauded for introducing — or reintroducing, as the case may be — his readership to a cast of fascinating characters who deserve to be remembered. For many of them, he offers brief biographical sketches. It is unfortunate, therefore, that for one of the key individuals on whom he draws heavily for his reconstruction, John Slade-Baker, the reader is offered little at all.

What the book also draws our attention to is the inordinate role of both U.S. and UK covert operatives in the shaping and conduct of policy. This is an immensely intriguing matter. It is tempting to speculate that the critical role of such actors reflected a desire by both the United States and the UK not to be seen as trying to shape the internal politics of Arab countries at a time of nationalistic fervor. In addition, there is the highly personalized nature of Arab politics and the confusion experienced by these two powers as they sought to discern what exactly was going on. Uncertainty on how to read events creates policy divisions and can induce paralysis within state bureaucracies, yet the desire to “do something” can encourage the political executive to rely on the “political action specialist.”

Overall, Mr. Barr is to be commended for his handling of the topic with verve and an appealing attention to the all-too-human element that invariably underlies politics. In so doing, he succeeds in conveying a sense of the complexity, confusion, passion and pain that attended British imperial decline.