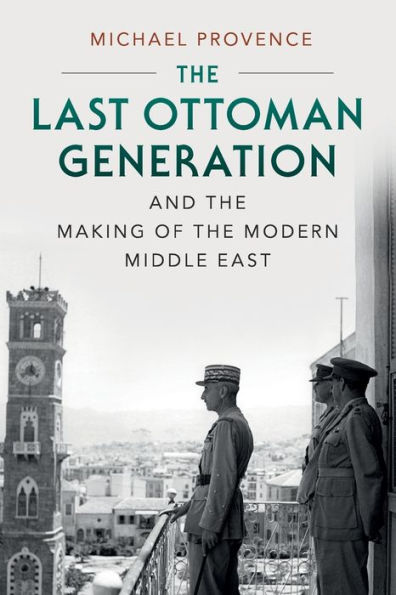 Few events in the history of the Middle East have had greater impact than World War I. The bloody fighting devastated the lands of the Ottoman Empire and marked the end of centuries-long political rule that had prevailed across swaths of the Middle East. By and large, the downfall of the old regime ushered in a new era of change and transformation in the region. The forcible partitioning of the Ottoman Empire after the war led to the colonial rule of much of the empire’s lands by Britain and France and brought about the creation of the modern Arab world and the young Republic of Turkey. With broad strokes, the boundaries and states of the modern-day Middle East were drawn, as the huge political vacuum created by the demise of the empire was filled by successor states. The vast conglomeration of territories and peoples that formerly made up the empire was split into several new states under the tutelage of British and French mandates. Only Turkey succeeded in gaining its independence after the prolonged armed struggle waged by the national forces in Asia Minor.

Many nationalist historiographies of the twentieth-century Middle East routinely treat World War I as a historical rupture that set the region on a new political path. Much has been written on the successor states to the empire and the political upheaval that transformed the former Ottoman territories in ways that had not been seen for centuries. No doubt, the demise of the empire after centuries of gradual decline predicated the crumbling of long-established imperial rule and had cataclysmic impacts on society and political structure in both Turkey and the Arab Middle East. However, despite the sweeping claims of nationalistic accounts of Turkish and Arab historiographies, we know that Ottoman institutions, ruling elites, political culture and ways of thinking actually continued to resonate well beyond the Great War and left behind a divergent but resilient legacy. Michael Provence’s The Last Ottoman Generation and the Making of the Modern Middle East provides valuable insights and a remarkable contribution to this emergent scholarship, largely breaking with much of the earlier literature on the late Ottoman period and beyond.

In fact, The Last Ottoman Generation is not the only scholarly endeavor that highlights the continuity between the late Ottoman and colonial eras, standing against the idea that the twentieth-century Middle East marked a radical rupture with the past. To mention a few, Erik-Jan Zürcher’s The Young Turk Legacy and Nation Building advances the continuity thesis between the late Ottoman Empire and the early Turkish Republic, examining the legacy left by the Committee of Union and Progress and taken on by the Young Turkish Republic. Similarly, in The Ottoman Origins of Modern Iraq, Ebubekir Ceylan — whose chief concern is not to support the continuity thesis — demonstrates how the Tanzimat reforms of nineteenth-century Ottoman rule forged the roots of modern Iraq.

Making a valuable contribution to this line of inquiry, Provence provides a vivid and connected history of the inter-war Middle East that skilfully captures the deep Ottoman roots of the Arab Middle East. He particularly focuses on a generation of men who had been educated together at prestigious imperial academies and served in the same army, sharing a way of looking at the world. By tracing the untold stories of this generation, Provence powerfully documents how the Ottoman-trained Arab military and political elites sustained a shared experience of Ottoman modernity and sense of belonging to the empire, even under European tutelage. Provence`s book starts with a fascinating chapter on the education and training system that had been introduced as part of Ottoman modernization efforts during the “long” nineteenth century. Provence argues that these schools and military academies engendered a cadre of specially trained military and political elites who were inculcated with loyalty to their homeland and a shared ideology of defending it from European colonizers. As the main axis of his inquiry, Provence relies on colorful biographical sketches of this Ottoman-schooled generation, who later became well-known political figures in the Arab Middle East. As he writes, “The Ottoman State schools and institutions that shaped them gave meaning to their lives and struggles even after the state they had sworn to serve had disappeared” (p. 48).

While the first chapter provides a thematic overview, the rest of the book follows a chronological line of inquiry devoted to the wartime experience and the dissatisfaction with postwar settlement through the eyes of the last Ottoman generation. In Chapter 2, Provence proceeds to describe the British and French disposition of Ottoman territories and the final settlement reached under the League of Nations mandate system. The story is well known, but the author gives a fresh look at the merciless and unethical imposition of the British and French mandates by delving into the grievances and disappointments of the former Ottoman subjects. In the third through sixth chapters, Provence surveys locally rooted resistance to the dictated terms of the mandate system during the 1920s and 1930s. Over the rest of the book, he skilfully describes the varying course of anti-mandate struggle in Anatolia, Iraq, Syria and (to a lesser degree) today’s Palestine by excavating remarkable details about the roles of the Ottoman-educated officers. Among the historical figures whose lives are narrated are Yasin al-Hashmi, Fawzi al-Qawuqji, Abd al-Rahman al-Shahbandar and Shakib Arslan. These were war-hardened former civil and military officials who trained at modern Ottoman state schools and felt affinity to a cross-national brotherhood of the same generation.

Drawing on voluminous public and private documentation, Provence shows that many of the Ottoman Arab elites actually remained loyal to imperial rule and only became part of mandate governments after the final defeat in Syria. Moreover, the establishment of the mandate system over Iraq, Syria and Palestine did not appease the outrage among the Ottoman-educated Arab officers. In fact, the success of Kemalist resistance to the partition of Anatolia became a source of inspiration and heartened those who appreciated it as a model in their own struggle against the British and French mandates. As Provence writes, “Events in Anatolia were widely known and greeted rapturously in Damascus, Jerusalem and many other places” (p. 134). However, both Britain and France managed to contain all the insurgencies carrying out atrocities on locals to secure colonial control over old Ottoman Arab lands.

In the end, what emerges from the viewpoint of the last Ottoman generation is the story of lost hope, the end of plans and unfulfilled expectations. Many of the former Ottoman subjects had to learn the painful realities of the post-World War I settlement. A half-hearted rapprochement was reached between the colonial masters and what Provence calls the last Ottoman generation. The final chapter concludes with a discussion of foreign intervention, the crisis of legitimacy and the unhappy consequences of the mandate system before the outbreak of World War II. As Provence writes, “Mandate citizens proclaimed repeatedly, Ottoman rule had delivered an imperfect but superior semblance of rights, justice, and representation to the majority of the population. … The Ottoman state was more legitimate and representative than the colonial regimes that replaced it” (p. 271). This last chapter highlights how disappointments and the loss of hope under the mandates shape the politics of today`s Middle East and sowed the seeds of enduring conflicts down to the present day.

Overall, Provence’s The Last Ottoman Generation is a valuable and highly readable volume for those interested in Middle Eastern history and politics. Challenging the very parameters of nation-centered narratives, the book offers a complex history of the modern Middle East that covers a wide range of topics, such as the resilience of the Ottoman Empire, resistance to and repression by Great Power colonialism and the making of the modern Middle East. The book is based on extensive archival research spanning the national records of Syria, Turkey and Lebanon, the archives of the European powers involved, official documents of the League of Nations, personal memoirs and press reports. Relying on these and other sources, Provence ingeniously links historical facts to bring the late Ottoman and colonial eras to life for modern-day readers. In particular, the use of the personal life trajectories of some of the leading figures of the time adds vividness. Provence’s ability to connect so many of them and highlight the common Ottoman lineages of the Arab political elite is a real strength. However, there is room for improvement and opportunities for further research. The book is mostly written from an elite-focused standpoint; we learn less about the resilience of Ottomanness as a supra-ethnic and supra-national feeling of belonging among diverse social classes and ordinary Arab people. It would be interesting to explore common experiences and the intercommunal connectedness of the post-Ottoman Middle East at a societal level. A corresponding question would be to study social history, people’s struggles, connectedness and collective roles during the imperial afterlife of the empire.

Moreover, even though the book makes occasional reference to Ottoman Arab figures who felt affinity to the revolutionary and anti-colonial ideology of the Committee of Union and Progress (Young Turks), the unifying and mobilizing discourse of the Young Turks movement and its impact on Ottoman Arab elites remains limited. In fact, the last Ottoman generation was not only the product of modern secular, military and civilian schools but also the product of a modernizing and revolutionary ideological milieu of late the Ottoman Empire. Thus, further research should explore the common ideological values and shared political commitments that bound such a diverse cadre of ex-Ottoman officials together. Leaving aside what the book omits, there is much to praise for what it provides. Written in engaging prose and supplemented with extensive archival research, the book makes a notable contribution to the literature of modern Middle Eastern history. On the whole, it not only sheds light on late Ottoman history and the mandate period but also fills an important gap in our understanding of the origins of current political problems.