Israel under Siege: The Politics of Insecurity and the Rise of the Israeli Neorevisionist Right 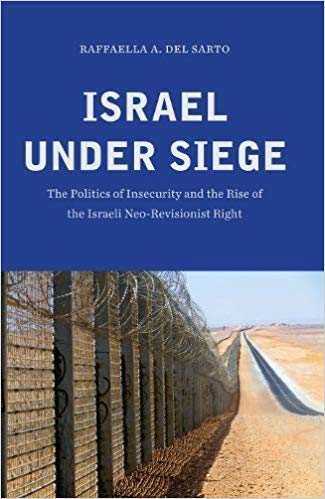 In the first decade of the twenty-first century, Israel experienced a core transformation of its political orientations and discourse. This resulted in a new “foreign-policy consensus” that was ingrained in the philosophy of being under constant siege, politically and ideologically (p. 74). Israeli foreign policy has undergone a drastic change in its new attitude toward the geographical structure of the Middle East and the transforming geopolitical interests in the region. Raffaella A. Del Sarto’s intriguing examination of the current political environment and the Palestine-Israel peace process, in particular, sheds light on the emergence of “neo-revisionism,” which calls for the establishment of a Jewish state in all of Palestine, Israel and the Arab lands occupied since 1967.

Throughout Israel Under Siege, Del Sarto offers a detailed analysis of the “construction of Israeli identity as a nation under siege” (p. 29), a concept that forms the main subject of the book. The rise of a hegemonic sense of the Israeli nation-state and Zionist identity is a natural result of the disintegration of the Labor Party, which has failed to mount any sort of community-inspired defense against the rising security threats posed by the ultra-nationalist right. Del Sarto cites Zeev Maoz, a professor of political science at the University of California, as having argued in his influential text Defending the Holy Land: A Critical Analysis of Israel’s National Security and Foreign Policy (2006) that the essential “defensive ethos” of the Israeli community is a “centralized, self-serving, and self-perpetuating security” (p. 158). Because the Labor Party betrayed the Israeli idea of communal defense by failing to predict the 1973 October Yom Kippur War, the party lost the elections to Herut and later the nationalist right Likud, led by Menachem Begin. This, Del Sarto writes, was labeled as the “upheaval” (mahapah) in 1977, a time when the Labor Party gave way to the rise of an extremist movement of Israeli nation-state (p. 162). Here, Del Sarto also highlights the impact of the Oslo Agreement and the Arab Spring on Israeli society, which became increasingly influenced by the neorevisionist discourse of Prime Minister Ehud Barak, who “deserves the credit of coining” political neologisms such as “no partner for peace (ein partner le-shalom),” after the failure of Israeli-Palestinian negotiations of Camp David (p. 2).

One must not underestimate the effect of the second intifada, which led many Israelis to adopt a right-wing stance toward the five-year uprising. With the end of the years of unrest, Likud, led by current Prime Minister Binyamin Netanyahu, rose to power and reinforced a politics of fear that has sought to ignite the notion of a perpetually endangered Israeli identity. Israel’s leaders exploited this public fear through posing questions about national security, the achievement of which is threatened by Hamas, Hezbollah and Iran. These Islamic powers have contributed to the reinforcement of the omnipresent discourse of Israeli neorevisionists, who view Iran’s growing power and regional domination as a genuine issue that must be resolved.

Del Sarto writes that Israel’s neorevisionist identity politics do not “remain confined to the ideational level; they become institutionalized and thus part of the material structure as well as of everyday political practices” (p. 222). The constant expansion of Israeli settlements in the West Bank, for instance, comes as a reassuring material fact in a nation under conceptual siege. After the establishment of Israel, its first prime minister, David Ben-Gurion, made this clear, announcing that the newborn state will always be “the weaker party” that has to defend itself against the “great Arab ocean extending over two continents” (p. 155). Yet Israel’s neorevisionist policies and expansionist actions have been met by opposing voices from the peace camp and the disapproval of the international community. This has gradually led to Israel’s isolation. Not only does Israel’s policy change toward Palestinian lands affect its international relations; it also calls into question its regional behavior. This is exemplified in the Mavi Marmara incident of 2010, when Israeli troops commandeered in international waters a civilian vessel and killed nine unarmed activists, attempting to peacefully break the siege of Gaza. Del Sarto points out that this incident, Israel’s expansionist policies in the occupied Palestinian territories and the 2006 Lebanon war, stands as fundamental reasons for Israel’s regional and international isolation, the cause of nine condemnatory UN Security Council Resolutions (UNSCR) against Israel from 2000 to 2009 (p. 121).

Even though Del Sarto offers a generous reading of Israel’s foreign policy between 2000 and 2010, she falls short of establishing links between Israel’s policies and its changing relationship with the Arab countries. The beginning of the second decade of the twenty-first century witnessed a dramatic shift in Arab-Israeli relations, especially in security and capital investments. For example, combating the rising power of Iran and Turkey has led to the establishment of new geopolitical alliances between Israel and the Arab Gulf in order to create a conflict-free zone. This alliance is, moreover, fundamentally aimed at holding back the imperialist regional activities of Iran and the practices of Turkey, which continues to support the Muslim Brotherhood in the Middle East. Therefore, one useful thing Del Sarto could incorporate into her book is a fair treatment of the domestic and foreign policies of neighboring Arab countries, which contribute to the shaping of current Israeli policies. Laying out in front of the reader the historical background of Arab politics helps to develop an understanding of the evolution of neorevisionism in the Middle East. The developing power of the Israeli neorevisionists’ rhetoric is propelled by the shifting image of Israel in the Arab world, especially the Gulf. In the last few years, the image of Israel has publicly changed from being a source of regional danger to an appropriate and even humane military and diplomatic ally.