Inside the Battle of Algiers: Memoir of a Woman Freedom Fighter 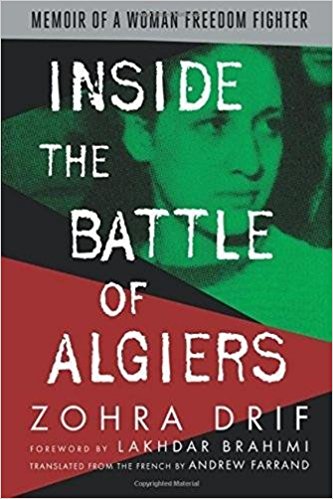 Inside the Battle of Algiers is an exciting story to be read on several levels. It is the detailed account of the fourteen months of the battle for Algiers in the most heated period of the Algerian National Liberation Army (ALN) struggle for independence from France. In the first two years after the November 1954 outbreak of the struggle, the ALN carried out sporadic terrorist activities; after the attack on civilian targets concentrated in the capital was broken, the combat moved to guerrilla activity in the countryside until the independence negotiations in early 1962. The Battle of Algiers was the high point of the struggle and the brutal reaction of the French army was decisive in turning large numbers of individual Algerians, indiscriminately lumped together as "the enemy," into supporters of the National Liberation Front (FLN). The book is a detailed inside account by a dedicated operative of the intense activity during that long year, including the decisions when and where to strike, the constraints of availability of equipment, the cat-and-mouse game within the city composed of its targets, the search for safe houses and secret hiding places, and others. The hit-and-run campaign was indeed successful in sowing terror among the French inhabitants and justifying in their eyes the intensive penetration of the compact, unknown territory of the Casba. It's a thriller.

It is also the story of the internal operations of a cell of a national liberation movement that depends above all on secrecy, beginning with the search for contacts and the careful vetting of the candidate. Recruitment of a mole can be fatal to the movement from the beginning. Thereafter, the recruit lived in a cocoon, cut off from former friends and even family under whose close supervision she had grown up. Life within the cell of fellow recruits and new colleagues was active and intimate, and surrogate families were available. Yet "cocoon" is not fully accurate, for the recruit ventured out into the society she was seeking to destroy, on occasion even seeking refuge among old acquaintances from among the enemy. In the end, the pressure of torture on one of the members broke the threads of the cocoon and let the army in; the interrogation that followed was an anticlimax.

It is also a portrayal of a search for freedom, a drive to be oneself and not be defined by the colonial occupant. Modernization (not to be termed a "civilizing mission") is not to be rejected but it must be worn under national clothing, As the struggle goes on, that symbiosis falls away: the call to action severs synthesis and pushes the parties to extremes. It is never clear what the ringing call for freedom contains, except the ability to make one's own mistakes, and Ms Driif is not happy with post-1962 Algeria. The struggle is its own justification.

But the story is also the account of visceral consuming hate, so strong that is both insightful and questionable. The hatred was directed against the French colonial occupation and since it is perhaps not as satisfying to target an inanimate system, it was personified against the French army. But the system was not just the occupying army but all the pieds noirs who prospered under its protection, and the burning animosity was direct against them too, as an undifferentiated mass. It was generated while growing up at home, in an isolated traditional family, widely aware of world events around them but seen through the lens of a closed worldview. As she grew up, the worldview became personified in the army and the colons, the living presence of the system. It is hard to understand how a person can navigate through that crowd of hostile non-faces on the forays into town. It is hard to understand how a person can differentiate between that crowd and occasional individuals from past normal contacts. Yet that total, dedicated, generic animosity is what makes up the mind of a terrorist, who at the same time is engaged in normal friendly relations not only within the group but selectively outside. The cocoon is not just a physical isolation but the narrow window of a weltanschauung.

Such true believers make good activists and poor negotiators. Algeria did negotiate its independence: the political wing of the FLN bargained while the militant ALN prepared the context, but by 1962 heavily weakened. That is perhaps the lesson for negotiating with terrorists, which is a necessity but only possible when a political wing is strong enough to identify a subject and to make compromises to attain it. Zohra Drif, who later married one of the FLN's political leaders, Rabah Bitat, has many lessons for today in her captivating, committed, personal account of events six decades ago.