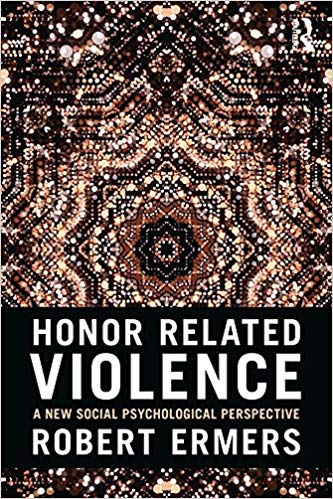 Honor killings are not just horrifying; they seem unintelligible. Perpetrators claim they had to restore their family honor, but how can you do that by killing a relative? Honor Related Violence sheds analytical and social-psychological light on this question. The book succeeds in giving the reader a deeper understanding of the justifications and emotions behind honor-related violence. The author, Robert Ermers, is an Arabist and Turcologist from Radboud University in Nijmegen (Netherlands), as well as a researcher and counselor concerned with honor-related violence.

The book shows that honor should be conceived as one’s moral reputation for trustworthiness, reliability and integrity. By contrast, dishonor is a bad moral reputation or a reputation of untrustworthiness. Once you have behaved badly by committing theft, murder, rape or child molestation, or not responded properly to a moral insult or attack, and this becomes known, you feel the need to apologize (guilt) and hide (shame). You are dishonored, and so is your family, lineage, clan or tribe. Stigmatized, ostracized and rejected, you cannot hold your head high in public, as people insult you for being a criminal, a sexual deviant or “less than a man.” If you are a woman, you are attacked for your own lack of sexual purity and called a “whore,” or for being a relative of a moral deviant. Colleagues and friends shun you. Your prospective spouse declines your offer, and your in-laws may file for divorce.

The Middle East is, of course, not unique in ostracizing people for sexual deviancy: in the West, soldiers who fled the front in World War I were judged morally dishonorable cowards or even killed for abandoning their community. European women who had sex with Nazis during World War II were later rejected, as were their children and others coming from “bad stock.” Even today, the relatives of rapists and child molesters are often ostracized. Similarly, in the Middle East, a morally deviant act stigmatizes one’s family and causes “social death,” crushes self-esteem and stokes anger. In this context, honor-related violence is moralistic rather than predatory, directed against the cause of the stigma in order to end it and restore trustworthiness, courage and loyalty to the family. As we will see, not all Middle Eastern male-on-female violence is honor related, and not all honor-related violence is male-on-female or Middle Eastern.

A person may use honor-related violence in order to protect his family honor. For instance, one may use violent social sanctions against a moral deviant (kin or non-kin) to protect one’s family against the behavior and prevent it. One may respond violently to moral insults and attacks. One may also use violence to keep others from disclosing information such as an illegitimate pregnancy, that would trigger social rejection. While such “honor-related violence” is perpetrated to protect honor, both “blood revenge” and “honor killings” explicitly aim at restoring lost honor.

When someone has been killed or attacked by a member of another family, the kin of the victim may practice blood revenge — retaliate against the murderer to demonstrate courage, loyalty and commitment to the family, restore their moral reputation and thus avoid ostracism. Alternatively, in the process, a girl might be married to a member of the victim’s family as compensation for the deceased; the family might legally forgive the criminal and receive blood money (as sometimes happens today in Saudi Arabia, Iran and Pakistan and used to happen in Europe), or both families may agree to exchange brides and form an alliance.

In extra-familial honor killing (external, Type I), the perpetrator kills a rapist, usually from another family, in order to retaliate against the rape (or seduction, elopement or child abuse) of a kinswoman and publicly show outrage and bravery. When someone is forcibly penetrated or a woman is lured into sex through false marriage promises, the family is dishonored. Not only does the rape or seduction victim feel shame and is often blamed and seen as impure and unmarriageable; all her kin, who were supposed to protect her, are now seen not just as cowards, but as weaklings or pimps. One way to restore their lost honor is to kill the rapist or seducer. Alternatively, the family may try to keep the rape secret, marry the victim to her rapist, as his kin may suggest, or use violence against the victim when she is seen as at fault.

In intrafamilial honor killings (internal, Type II), the perpetrator kills a kinswoman who has had voluntary extramarital sex — or a “passive” homosexual or other sexually deviant kin — or a cowardly male who did not retaliate against an attacker, in order to publicly distance himself. A woman’s extramarital sex and a man’s cowardly behavior cause a “stigma by association,” a loss of moral reputation of the entire family, and “vicarious shame.” In some communities from Turkey to Yemen and Egypt to Pakistan, killing the sexual deviant may be the only socially accepted way to prove the family has severed the bonds with her/him and to regain their reputation for sexual morality, chastity and purity, thus ending their shame and ostracism. In Pakistan, intra- and extra-familial honor killings may be practiced simultaneously, typically against both a male seducer and the female kin who fornicated with him, as in the double honor killing of adulterers. In India and Pakistan, an entire family’s loss of honor may be triggered by inter-caste marriages. Following the killing of the morally deviant kin, the family may reintegrate into the community as in-laws, friends, neighbors, colleagues and customers. Another socially accepted way to end the stigma might be to expel the deviant from the family, divorce her, cease to live with her/him or force her/him to commit suicide. Alternatively, if an extramarital pregnancy cannot be kept secret or aborted, the family may restore its lost honor by moving away or by organizing a shotgun marriage with the natural father or another candidate, a practice also common in Western Europe until recently.

When a family starts to fear the social consequences of the disclosure of a rape or sexual deviance, they may panic and rush into action for fear of hesitating too long. The perpetrator of the honor killing, whether extra- or intra-familial, might be a volunteer, or the family may choose a man without a wife and children — in case he goes to prison or has to hide — or a young boy who is likely to get a reduced punishment. Approximately half the victims of honor killings in both Turkey and Pakistan are male (rapists, seducers, “passive” homosexuals and cowards), while the other half are women, some of whom presumably had extramarital sex. More generally, most countries in the region (except perhaps Jordan) have similar degrees of tolerance for honor killings against males and females.

In a Middle Eastern context, labeling a murder case an “honor killing” usually implies the victim was a known sexual deviant and the perpetrator was motivated to restore family honor, which makes the crime a matter of morality and more justifiable in the eyes of the community. This is why some killers falsely claim their act was, in fact, a matter of “honor.” A rejected suitor who attacks a woman does this out of jealousy and spite, not to restore any moral reputation. Killings that result from threats made to increase marriage payments (“dowry killings”) are motivated by greed, not honor. A man who kills his sister for alleged adultery and then seeks “justice” from her lover’s rich family may simply act out of greed. It is crucial, Ermers implies, not to equate honor-related violence with all Middle Eastern male-on-female violence.

Why does honor-related violence seem most frequent “from Turkey to Yemen and Egypt to Pakistan?” Although the book does not raise this specific question, it suggests a few answers based on extant studies. First, where no government can enforce law and order and protect people’s goods, livestock and relatives against thieves and abusers, people tend to invest in their reputation for toughness and bravery and react to insults with violence. Thus, an “honor culture” emerges, including blood revenge. Second, where the state is weak and families, lineages, clans and tribes are extended and cohesive (valued as a way to get protection and resources), kin have high mutual expectations concerning their behavior and reputation. Dishonor stains more relatives more intensely, hence there is a higher risk of honor-related violence. Where patrilineages and clans are stronger, more coherent and more extended, as in the Middle East, there seems to be more honor-related violence than where they are weaker, as in the West or even the Maghreb. Third, the Middle East values female sexual honor particularly highly (virginity is a symbol of chastity and moral purity) and has the world’s strictest mate- and daughter-guarding practices, though Ermers does not address why.

The book thus distinguishes (1) honor-related violence (designed to protect, not restore, honor), (2) blood revenge (to restore honor lost through murder), (3) extra-familial honor killings (to restore honor lost through rape) and (4) intra-familial honor killings (to restore honor lost through a kin’s sexual deviance). This classification now needs to be confronted by empirical data, which remain to be collected. Researchers still do not know how the incidence of each type of honor-related violence varies across time and populations. The little international data that is available concerns opinions regarding honor killings. In 2011-12, 29,903 self-declared Muslims from 22 Muslim-majority countries and Russia and Thailand were asked: “Some people think that if a man/woman engages in premarital sex or adultery, it is justified for family members to end his/her life in order to protect the family’s honor. Do you personally feel that this practice is: often justified / sometimes justified / rarely justified / never justified / don’t know?” (Pew Research Center, The World’s Muslims: Religion, Politics and Society, 2013.) Large majorities of Afghans, Iraqis, Bangladeshis and Egyptians do not say that honor killings (against males as well as females) are “never justified”; presumably they find some of them justified. By contrast, in countries further from the heart of the Middle East such as Azerbaijan, Kazakhstan, Indonesia or Bosnia-Herzegovina, social acceptance of honor killings is much lower. Future research on honor-related violence should help us understand these variations, not just in opinions on honor killings, but also in their incidence.