Egyptian Advice Columnists: Envisioning the Good Life in an Era Of Extremism 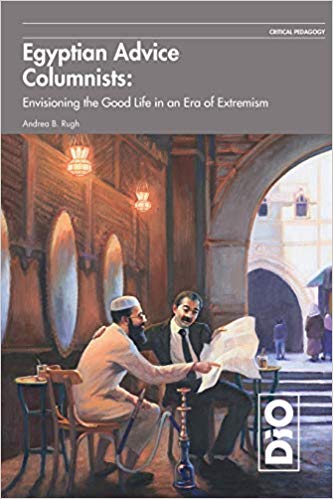 In her illuminating new book, Egyptian Advice Columnists: Envisioning the Good Life in an Era of Extremism, Dr. Rugh explores societal forces in the rapidly changing Egypt of the 1980s and ‘90s through the lens of these exchanges. Studying newspaper readers’ questions and the sometimes surprising responses from the columnist and clerics, Dr. Rugh highlights invaluable information about Egyptian social institutions and their impact on people’s lives. Readers interested in the causes that led to the 2011 uprising in Cairo will gain rare insights into the social, moral and economic factors that influenced the middle class.

Dr. Rugh applies a masterful combination of scholarly research, close yet respectful observation and nonjudgmental analysis. With a doctorate in anthropology from American University in Washington, DC, in 1978, Rugh lived for decades in the United States, Middle East, South Asia, and Africa, with her husband, a U.S. diplomat. During her years overseas, Dr. Rugh worked as a technical adviser for USAID, while studying the Arab world’s language, history, religions and literature, and viewing movies, popular theater and art shows. She also worked for Save the Children and UNICEF in Afghanistan and Pakistan, using the anthropological skills she had honed in the Arab Muslim world.

During Dr. Rugh’s time in Egypt, her deep familiarity with the concerns of Egyptians enabled her to put the column writers’ responses in context. Her work alongside an Egyptian social worker in a welfare center in a poor section of Cairo showed her firsthand the struggles Egyptians faced every day.  As a respected member of the diplomatic community, she had unique points of entry into local society and exploited every opportunity to expand her considerable Arab contacts. She found venues for meeting new people and was creative in finding ways to show respect for and understanding of Arab culture. Upon receiving the warm hospitality that was typical of her Middle Eastern postings, Dr. Rugh always reciprocated, hosting dinners and outings with her growing list of Arab friends.

Dr. Rugh has written several well-received books about Egyptian society. In Christians in Egypt (2016), she wrote from her vantage point of a volunteer in a mother-child clinic in a poor quarter of Cairo, where for five years she interacted almost daily with Christians and Muslims. Her book tells the history of Egypt’s large Christian minority, providing astute observations of Muslim-Christian relations. In Reveal and Conceal: Dress in Contemporary Egypt (1986), she recounts how women from all regions of Egypt interpret the origins and tastes of the women they encounter in the crowded quarters of Cairo by close, but unobtrusive, scrutiny of women’s dress, their accents and their habits. Dr. Rugh confesses that gathering this information from women she interviewed was difficult; unless she wove her questions subtly into a wide-ranging conversation, her interlocuters would find her questions stupid or even rude. Eventually she adapted her method of interrogation and was able to paint a landscape of Egyptian society’s spiritual, material and social life through detailed personal observations. Another book, Family in Contemporary Egypt (1984), shows that, unlike American society, which values individualism above all else, the extended family is the building block of society in Egypt.

In this latest work, Dr. Rugh manages to explore intimate issues of concern to a broad swath of educated Egyptians without invading their privacy. Avoiding the potential bias inherent in interviews, Rugh examined 200 advice columns to learn how Egyptians dealt with the problems that arose during this period of rapid change, relying heavily in her analysis on the well-known columnist Abdul Wahab al-Mutawa. He answered inquiries about a wide range of personal issues, while government-sanctioned clerics, most from Al-Azhar University, responded to religious questions, basing their responses on the Quran and hadith (sayings of the Prophet). These purveyors of advice did not identify their correspondents, in most cases, conveying advice in general terms, revealing no details that would give the questioners away.

Taking an Egyptian friend with her, Dr. Rugh called on al-Mutawa to learn how he composed his columns. He studied journalism and started working for Al-Ahram at age 18, in the sports section. He later headed the section on investigative reporting and eventually became editor-in-chief. Al-Mutawa wrote his advice columns from 1982 until he retired in the 1990s; the problems that appeared in his columns inspired several short stories, novels and even films. After retirement, he hosted a TV show called “Moment of Truth,” which accepted calls from all over the Middle East. He authored 52 books over his lifetime. Each week he hosted what he called a “red agenda” night, when advice seekers would gather outside his office to consult him face-to-face. He held this open house for people with problems that were usually financial in nature. With donations from anonymous benefactors he had recruited, al-Mutawa was able to provide money, jobs and other help. Sometimes he even arranged meetings between men and women who were looking for marriage partners.

The religious clerics were often prominent writers. The most well-known was Sheikh Gad El-Haq, who held the title of grand imam. He was strongly opposed to Wahhabi teachings, thus pleasing the government. However, he publicly opposed abortion and advocated female circumcision, which were not the position of the government. He advocated punishing those who broke the Ramadan fast and even opposed the government’s endorsement of the Oslo Peace Accords. Shaikh Muhammad Tantawy, the grand mufti of al-Azhar and later grand imam, was a moderate and, unlike Sheikh Gad, found abortion permissible in the case of rape and condemned female circumcision. Dr. Rugh describes Mohammad Metwalli al-Sharawy as the most popular Islamic preacher in the Arab world, who hosted a TV show on Friday afternoons that aired his sermons.

Dr. Rugh points out that the sheikhs who responded to the letters were being paid by the government for their work. Nasser had put Al-Azhar University, considered the most influential center of Sunni teachings in the world, under governmental control, treating the religious figures as government employees. Nasser assumed that, once paid by the government, they would follow its line, producing teachings that countered radical extremists. Dr. Rugh found that the sheikhs often took the government line, but also sometimes advocated opposing positions. Their expertise gave them considerable latitude when they wrote about religious topics. The sheikhs were generally conservative in their beliefs and usually acted as a buffer to extremist preaching. The book provides fascinating insights into how the clerics were able to speak through the advice column to influence a wide audience.

Rugh places the advice columns in the context of the historical events that impacted the lives of Egyptians during her period of study. Egypt’s independence from the British in 1955 ushered in a period of great transformation. The monarchy was overthrown, giving way to a period of military rule under Gamal Abdul Nasser, 1956-70, and Anwar Sadat, 1970-81. She explains how Nasser’s ambitious reforms undermined the quality of education. His promise of a civil-service job for every public university graduate increased the numbers of poorly paid government employees, resulting in an inefficient, bloated bureaucracy and rapid urbanization. His attempts at land reform also failed. The land distribution policies did not enrich the peasants, and attempts to expand the manufacturing sector produced mostly low-paying jobs. Religious conservatism grew during the time of President Sadat. Conservatives rejected advice to have fewer children in the belief that only God should determine the number. Thus, family size grew, increasing financial pressure, and family bonds weakened as the education gap between generations widened. These pressures can be seen in the advice columns she analyzes.

Dr. Rugh explains how President Sadat’s new policy of intfitah (opening) moved Egypt’s economy from socialist-style central planning to a Western-style free market. The result for the majority of the population was growing inflation and imported Western commodities few could afford. As the gap between rich and poor increased dissatisfaction, Egyptian workers moved to the Gulf countries in droves to find profitable work, weakening the family ties of the middle class.

Simultaneously, Egyptian public education involved rote learning; students were not encouraged to think critically. Dr. Rugh shows that they sought advice, rather than working out solutions on their own. As classes increased in size, teachers began to teach from textbooks they wrote and sold themselves. To succeed, the students memorized and regurgitated answers from the textbooks. The most highly paid faculties at university were medicine and engineering, and students applied to universities with vacancies in those faculties, even if they had to travel great distances to enroll. They then lived far from the influence of their families and were susceptible to the teachings of radical preachers. It was these two faculties, Rugh argues, that produced the greatest number of extremists.

In exploring the roots of extremism, Dr. Rugh also describes the expansion of Islamic schools and, later, private mosques and privately funded clerics. These institutions and individuals operated independently of the Al-Azhar network and were the source of the most extremist preaching. She also explains the four different schools of Islamic law, as well as the reasons for the restriction on independent interpretations. Despite the limits on the authority to interpret the law, however, the religious interpreting never stopped entirely; Islamic clergy and scholars could refer to any of the four schools of law to enforce their rulings.

Dr. Rugh comes to her analysis equipped with an excellent facility in spoken Arabic and, more important, a deep understanding of Egyptian society. She sought the help of Egyptian translators to ensure she understood the nuances of the questions and answers. She was open to challenges to any assumptions she might have had and gives examples of her surprise at some of the columnists’ answers. Rugh’s 40 years of experience in Arab countries as an anthropologist and the wife of a respected American diplomat show through in her work. Her access to both educated elites from diplomatic circles, and the average citizens she met through her work at the Bulaq Health Clinic, gave her unique insight into Egyptian society as it moved towards extremism.

In Egyptian Advice Columnists, Dr. Rugh has given the reader fascinating insights into the forces that were shifting and directing Egyptian culture, forces that should be better understood by policy makers studying Egypt’s recent turmoil and thinking about where the country may be headed. Dr. Rugh’s extraordinary experiences, and keen intellect, make this book both a riveting read and a unique study of sociopolitical change.