The Economy of the Gulf States 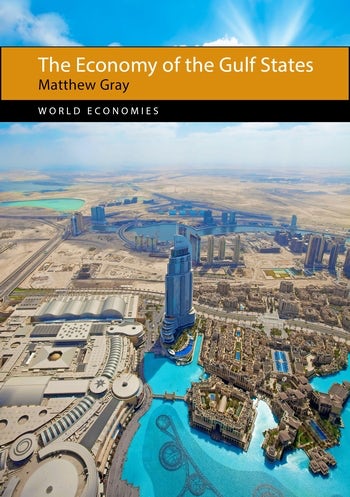 Matthew Gray offers a broad overview of the historical and current political economy of the Gulf states. The book is aimed at a general audience and serves more as a popular press offering, though it could be used in global-studies courses as a text for graduates or undergraduates interested in an introduction to the Gulf. This is both a strength and a weakness. The book offers good background and analytical framing of the region, but it is not consistent in its reference to the academic literature, as it sometimes offers an analytical argument couched as a general assessment, rather than a point of debate within the literature. There is also the slight issue of the title, which promises an economic study of the region. The book is not about economics and lacks a significant examination of trade (p. 99) and finance. It is rather an overview at the intersection of politics, economics and history in the region, which Gray duly notes in his preface (p. ix).

Gray offers four conceptual mechanisms to frame his analysis of the political economy of the Gulf: rentierism, state capitalism, neopatrimonialism and economic statecraft. These are all useful concepts to develop in the study of Gulf political economies, and each is part of ongoing research agendas and debates within the field. In identifying these concepts, Gray draws from his own strong work on challenging the concept of rentierism and teasing out how and why late rentierism is shifting current relationships between state and society within the Gulf. The concept of state capitalism is a tricky one. Historically, the term has been used in a variety of contexts from histories of Marxist thought to descriptions of state-run economies in the socialist model to more liberal versions of Asian state-led growth in the 1980s and 1990s. In Gray’s use of the concept, he emphasizes investment in state-owned enterprises, which has formed a kind of diversification effort in firms outside of the energy sector (p. 49). Throughout the book, however, he gives less attention to the role of private enterprise, particularly the strength of private firms started and held by expatriates.

Gray also uses the concept of economic statecraft in the external reach of Gulf foreign and economic policies. He has an interesting, though problematic, argument that the rise of Qatar and its provision of defense spending and foreign-policy activism from the early 2000s was a precursor and a causal factor in precipitating the Saudi and Emirati foreign policies of the post-2011 period (p. 140). In deploying the concept of neopatrimonialism, Gray relies on some general observations on the role of kinship and patronage networks in varying contexts within the Gulf (p. 174). He explains the variance between political economies with more responsive decision-making systems based on the strength of merchant families and legislative bodies in Kuwait and Bahrain.

The book is divided into seven chapters: an introduction, Gulf Economic Story, Measuring Gulf Economies, Form of Gulf Political Economies, Human Factors in Gulf Economies, Unique Factors in Gulf Economies and a conclusion. In this structure, there is significant overlap, particularly in the area of human factors, which are covered frequently under labor markets and migration. Gray returns to his four key concepts throughout the book. In his chapter on Measuring the Gulf Economies, he describes the investment strategy of Gulf sovereign wealth funds as a diversification effort outside of energy markets (p. 105). This may have been true 10 or 20 years ago, but this is decidedly different today. For example, nearly all of the Gulf sovereign-wealth funds now have co-investments with the Russian Direct Investment Fund (RDIF) in energy projects, as a hedge against their own energy production and exports to China, and as a means of revenue generation. His discussion of the growth of the natural-gas industry’s “less political nature” than that of the oil sector has also been thrown into question, as seen very clearly in the UAE-Saudi rift with Qatar beginning in 2017 (p. 121).

In his effort to cover a wide territory, both geographically and empirically, Gray has made a strong contribution to the study of Gulf political economies. Though this work does not cover new theoretical ground and does not seek to fully represent the depth of debate among Gulf scholars, it does provide a broad understanding of some of the historical and sociological factors of the regional economy.