It is with profound sadness that the Middle East Policy Council announces the sudden passing from a stroke of our president, the Hon. Ford M. Fraker, former U.S. Ambassador to the Kingdom of Saudi Arabia, over the Labor Day weekend. Ambassador Fraker had a distinguished career as a banker and diplomat, and played a key role in expanding the Council’s relationships and enhancing the value of the Council’s conferences and other activities in Washington and the Middle East. He will be greatly missed by all at the Council, and we extend our sincere condolences to his family and his many friends. 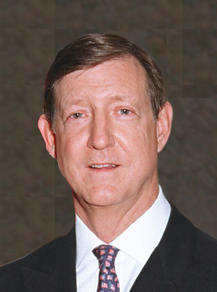 Ambassador Fraker served as U.S. Ambassador to the Kingdom of Saudi Arabia from 2007 to 2009, spanning both the George W. Bush and Barack Obama administrations. For the past several years, Fraker also served as Chairman, Merrill Lynch Kingdom of Saudi Arabia.  With over 40 years of Middle East experience at the intersection of finance and international diplomacy, he continued to advise senior administration officials on Middle East policy, with particular focus on the U.S. relationship with its Gulf partners. From 2009 to 2013, Fraker was a Senior Advisor to Kohlberg Kravis Roberts & Co (KKR), Chairman KKR Middle East and North Africa, and CEO KKR Saudi Ltd.  He also held positions with Chemical Bank in Lebanon, the UAE and Bahrain, with the Saudi International Bank, with MeesPierson Investment Finance (UK) Limited, and with Trinity Group Limited.  He held a B.A. degree from Harvard University.