The Caliphate of Man: Popular Sovereignty in Modern Islamic Thought 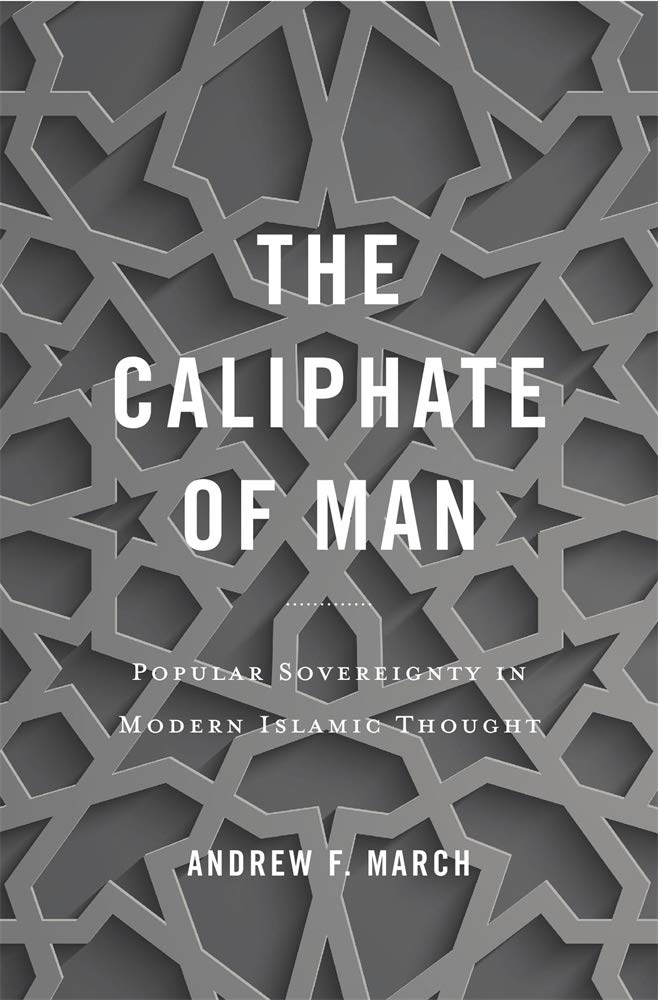 Populism is a powerful force in contemporary politics around the world. Populist movements provide mass support for anti-democratic authoritarianism and rightist nationalism as well as for pro-democracy movements to overthrow dictators and authoritarian systems. This broad range of activist expressions of populism indicates that it is more a style of activism than a movement with ideological or conceptual content. However, Andrew F. March shows that within the Muslim world, in addition to populism-as-method, there is an important historical tradition and current modern articulation of “theological foundations of populism in Islamic political thought” (p. 98). Muslim political thinkers have presented various doctrinal arguments supporting concepts of popular sovereignty as providing the basis for an Islamic state in which the people (defined in many different ways) are the deputies or caliphs of God. March’s The Caliphate of Man provides an important analysis of the development of this significant theological expression of political populism.

A “genuine intellectual revolution in modern Islamic thought” (p. x), March argues, is taking place. He examines the historical foundations and development of “a distinctive vision of democracy whereby a just and pious people governs itself while also representing God’s instructions to humanity” (p. xi). Within this framework, the “political theology of popular sovereignty in Islam is that the umma [the community of believers] has been entrusted by God with the realization of His law on earth” (p. xviii), making the people God’s caliph/deputy in the world. While this vision is revolutionary, it has roots in classical Islamic political theory as well as being a response to the emergence of the modern (Western-style) sovereign nation-state.

March begins his analysis by showing, in the preface, how the events of the Arab Spring in 2011 and the years following reflect contemporary trends. In Chapter One, he contends that important foundations for the ideal of Islamic democracy, as expressed in the Arab Spring, can be seen in the development of modern Islamic constitutionalism in the 19th century and in constitutional debates in Muslim countries throughout the 20th. This constitutionalism reflects a “dualism” in classical Islamic political theory, as discussed in Chapter Two, in which scholars, as interpreters of divine law, share authority with executive rulers (sultans) who hold coercive power (p. 19). Within this framework, “the people” as the community of believers has a role through “consensus and consultation” in the pre-modern understanding of the caliphate of humanity (pp. 32–7).

The abolition of the Ottoman caliphate and intellectual debates about the nature of the caliphate following World War I were important elements in what March discusses in Chapter Three as “the crisis of the caliphate.” This transitional period involved efforts “to resuscitate the caliphate with one eye on the new world of republics and nation-states” (pp. 40–1). Key figures in this process were Muhammad Rashid Rida and Abd al-Razzaq al-Sanhuri; their works are examined in some detail. Rida’s conclusion that “Muslims do not need to secularize their political life in order to achieve accountable and representative government” (p. 59) reflects the general lines of analysis and provides a basis for the emerging concepts of popular sovereignty involved in the “caliphate of man.”

Two key figures in the development of contemporary Islamic political theory are Abul Ala Mawdudi and Sayyid Qutb, whose major works are discussed in Chapters Four and Five. In March’s view, it is “with Mawdudi that the theme of the universal vicegerency of God — the caliphate of man — is popularized and given its distinctly political and collective interpretation” (p. 102). While Mawdudi rejects secularist democracy, he identifies his vision of the relationships between divine sovereignty and popular sovereignty as “theo-democracy” in which divine sovereignty is “a theology of both popular constraint and popular power” (p. 93). Qutb followed Mawdudi’s emphasis on the sovereignty of God, but March emphasizes Qutb’s concepts of the compatibility of sharia with human nature. Within this conceptual framework, Qutb argues that “Islam is ideally suited for application in this world because it is an essentially practical religion” (p.124). This means that the sharia is not only “a just law to be applied to humans,” but it is “a law through which humans in fact also govern themselves” (p. 146). The “realistic utopia” of Qutb — using March’s term (p. 121) — is not democratic, but there is a place for human self-governance within the framework of a comprehensive Islamic sociopolitical vision.

The “culmination of Islamic democratic theory” (p. xxi) in March’s view, as presented in Chapter Six, can be found in the political theology of Rached Ghannouchi, the Tunisian intellectual Islamist and political leader. March views Ghannouchi ’s major work, al-Hurriyyat al-amma fil dawla al-Islamiyya [Public Freedoms in the Islamic State], as a significant summation of discourses since the 19th century on the subject of divine and popular sovereignty (p. 152). Ghannouchi goes beyond the question of whether or not Islam and democracy are compatible. He affirms that the popular caliphate is inherent in Islamic teachings, making Muslim democracy a basic principle of Islamic political philosophy. In Ghannouchi ’s Islamic state, the “people is not only authorized to act politically in the world, but its political acts are seen to represent the sharia” (p. 194).

March suggests in his concluding chapter that, by the second decade of the 21st century, the emerging ideal of Islamic democracy faces challenges raised by “the irreversible moral pluralism of modernity” (p. 221) and “the inescapability of the modern state” (p. 225). He contends that “the language and imagery of sovereignty (whether divine or popular) can no longer structure an Islamic approach to political life,” and that future Muslim political thought may need to be “post-sovereigntist and post-statist” (p. xxii).

Contemporary political populism, in general, faces these same challenges. The debates aroused by the increasing pluralism of society are part of populism throughout the world. These disputes highlight the importance of how the various populist movements define “the people” whose sovereignty is being recognized. March begins his study with a speech during the Arab Spring protests in Egypt by the influential Egyptian Islamist intellectual Yusuf al-Qaradawi, in which he proclaimed that Egyptians of all types “became one … in order to liberate Egypt from injustice and tyranny” (p. ix). This inclusive definition differs from one that defines “the people” as the believing community, or umma. March provides useful analyses of Qaradawi’s views and also discusses Ghannouchi ’s inclusive approach to pluralism in Muslim democracy. However, it would have been useful, since he identifies the pluralism of modernity as a problem for contemporary Muslim democrats, if he had provided more coverage of how the other thinkers dealt with (or ignored) diversity and pluralism.

March’s analysis of popular sovereignty in modern Islamic thought is an important contribution to understanding contemporary Muslim political thought. It should also be helpful to anyone interested in the ideological dimensions of contemporary populism around the world.