Black Wave: Saudi Arabia, Iran and the Forty-Year Rivalry That Unraveled Culture, Religion and Collective Memory in the Middle East 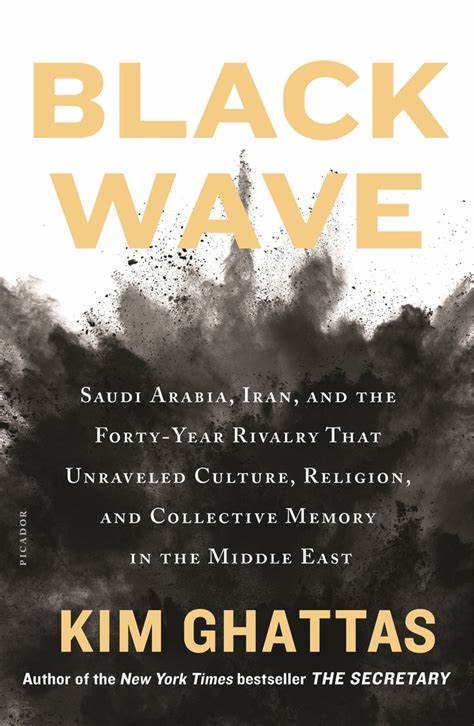 In this highly readable and insightful work, the Dutch-Lebanese writer Kim Ghattas traces the history of Islamic extremism in the Middle East and South Asia in the decades since the Iranian revolution of 1979. Herself a product of the region, Ghattas’s journey, as much a lament as an analysis, emerges from the telling question with which she opens her narrative: “What happened to us?” Over the course of the next 364 pages, she provides a richly detailed answer in 19 thematic chapters, bookended by an introduction and conclusion and organized along chronological and geographic lines.

The central dynamic in the story is the rivalry between (Shia-majority) Iran and (Sunni-majority) Saudi Arabia, played out as a competition between their respective Islamic sects. Ghattas eventually characterizes this conflict as “the weaponization of sectarianism,” a catchy phrase that could have substituted for most of the book’s very long subtitle.

Although many readers of this excellent narrative will be familiar with much of what Ghattas conveys, her contribution (and strength) is to enliven both the subtexts and the historical and regional contexts of the region’s recent history. She also personalizes her story with intimate details about the lives and actions of dozens of key players, including the thoughts and private utterances of many of the major protagonists in the Middle East’s downward spiral into politically manipulated, sectarian-driven extremism and terror.

Ghattas’s account unfolds under three sequential rubrics: revolution, competition and revenge. In chapter after chapter, Ghattas takes the reader across the Middle East and beyond, connecting the dots behind the black wave. She starts with the initial spark — the Iranian revolution of 1979 — and the developments leading up to it. Ghattas expertly weaves together the threads of rivalry, deceit and betrayal involving Shia clerics and communities in Lebanon, Iraq and Iran (and in Ayatollah Khomeini’s pre-revolution refuge, France) that culminated in the imposition of clerical rule (wilayat al-faqih) and the emergence of Khomeini as supreme leader in Iran. Her detailed description of the trail of murder and duplicity that led up to that outcome makes clear that the Islamic Revolution had nothing to do with moral principles and religious ideals; it was a power grab, pure and simple.

Ghattas next turns to contemporaneous events in Saudi Arabia, in particular the siege of the Grand Mosque in Mecca by Sunni extremists in late 1979. The Saudi regime was faced with a two-pronged challenge to its claim to leadership of the Muslim world: a fundamentalist Iranian government bent on exporting its Islamic revolution, and a highly visible group of fundamentalist Sunnis who condemned the Al Saud leadership for being insufficiently pious. Thus, the seeds were sown for a competition between Iran and Saudi Arabia to burnish their Islamic credentials by implementing and promoting the most austere versions of their respective sects, resulting in the black wave.

Ghattas proceeds to describe the onset and course of the black wave across the region, primarily through its effects on the lives of individuals of various backgrounds — religious, political, media, literary — some prominent, some not. The reader comes to know dozens of personalities based on Ghattas’s own interactions with them or accounts provided to her by those who knew and engaged with them directly. Through such intimate and detailed treatment, Ghattas weaves a narrative of lost cultural and community norms, of societies overtaken by fanaticism and extremism where moderation and tolerance had prevailed for generations. One of her most powerful subtexts is just how harmful this new fundamentalism was (and is) to Muslim women.

Perusing the chapter notes and reading Ghattas’s unusually extensive acknowledgements, one gains an understanding of how, through myriad personal contacts, she is able to depict in such intimate detail the events and actors behind the descent of the region into the abyss of Sunni-Shia enmity (she mentions well over 100 personal and professional colleagues with whom she consulted). On this impressive list are two prominent Saudis: the current foreign minister, Prince Faisal bin Farhan, and the former ambassador to the United States, Prince Turki bin Faisal.

I did not expect to see such stalwarts of the Saudi establishment thanked in a work that pulls no punches in criticizing the Saudi role in the Saudi-Iranian-orchestrated black wave of recent decades. Moreover, there is a full chapter on Jamal Khashoggi and his 2018 murder at the hands of the Saudi state in its consulate in Istanbul (Khashoggi was among those with whom Ghattas consulted in writing the book). This incongruity is perhaps explained by her inclusion of the fact that the current Saudi leadership has, to some extent, repudiated the hardline fundamentalism pushed by Saudi Arabia for decades, both within the kingdom and in its international promotion of Islam. Ghattas does applaud the recent loosening of formerly strict social proscriptions in Saudi Arabia, including the 2019 lifting of the ban on women’s driving. In what is likely a revelation to many readers, Ghattas describes the Shia origins of the Muslim world’s oldest and most important Islamic institution (and present-day bastion of Sunni Islam) — Al-Azhar University in Cairo:

The religious institution dated back to the Fatimids, the fourth Islamic caliphate and a Shia dynasty that ruled from the tenth to the twelfth century over a territory extending from the Red Sea to the Atlantic. … One of the first universities in the world, Al-Azhar was first built as a center of Shia learning and named in honor of Fatima, who was known as Al-Zahraa, the brilliant.

This historical tidbit resonated with me. While serving as the U.S. ambassador in Oman, I was joined by the U.S. ambassador to Iraq, Chris Hill, when the late Sultan Qaboos granted us an audience. He spent two hours educating us on the history of Islam in the region, including the origins of Al-Azhar.

Another of Ghattas’s points of personal meaning to me was her reference to the fundamentalist Egyptian broadcaster Al-Nass TV: “Salafist preachers pronouncing fatwas and discussing the road to salvation on Al-Nass TV.” When I was the deputy assistant secretary for public diplomacy in the Bureau of Near Eastern Affairs at the State Department in September 2012, Al-Nass broadcast a clip of an anti-Islam YouTube video titled Innocence of Muslims. Picked up by other broadcasters in the region, this triggered violent protests at several U.S. diplomatic facilities in the region and in Muslim-majority countries elsewhere, attacks that gave cover to the terrorists who breached the U.S. consulate compound in Benghazi, Libya, on September 11, 2012. U.S. Ambassador Chris Stevens and three other Americans were killed in the violence that followed — victims, sadly, of the black wave.

From my own experience living and working in the region over many decades, I would assert that Shia-Sunni animosity and sectarianism do not reflect the feelings and beliefs of those who comprise the bulk of the Muslim communities in the Middle East. Rather, the emergence of such attitudes derived from efforts by political leaders who sought to benefit from stoking such sentiments. I am confident Ghattas would agree with me; on the book’s final page, she writes: “Before it was weaponized in the years following 1979, the Sunni-Shia schism lay mostly dormant.”