Arabs: A 3,000-Year History of Peoples, Tribes and Empires 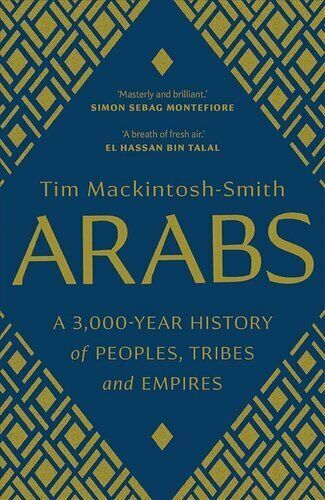 Sometime in the 1920s, the Arab Student Association of the United States held its founding meeting and, to no one’s surprise except for those oblivious to the debate, chose Arabic as the defining prerequisite for Arab national identity. More than just a sentimental or casual choice of the aspiring elite of the Arab world, it was a conscious and deeply significant political decision. Rarely has any nation defined its identity according to its vernacular tongue, if for nothing else than to avoid the shifting usage, structure and meaning in a living language, wherever this is spoken. The author of this massive study would have immediately grasped the significance of the choice, but with a caveat regarding the common misunderstanding of its benign effect. Tim Mackintosh-Smith, an Arabist par excellence, as well as a linguist who resides in Yemen (the south in Arabic), a fellow of the Royal Asian Society, a senior fellow of the Library of Arabic Literature and a translator of Arabic travel writing, would also enumerate the ways in which this identity alone has led to unification efforts, as well as wars. Additionally, he would be the one to demonstrate with the utmost competence how Islam itself was elevated through the use of Arabic, while resisting the secularist tendencies of the language throughout the centuries.

This book is clearly about the impact of Arabic on the Arabs and its changing role over time. It is also a pioneering historical study of the anthropology of the Arabic language (Arabic linguistics), in the tradition of the eighteenth-century German scholars Herder and Fichte, displaying the breadth and depth of analysis that contributed to the unification of the German states under Bismarck. Yet, in the author’s view, the Arab identity contributed to both the unity and fragmentation of the Arab people. Today it is still synonymous with nomadic existence outside of settled society. The more Arabs submit to civil society, the more they lose their claim to an Arab essence. Thus, what seemed to be a swipe at Islamic identity by the Arab students in the United States may have opened the way for other, unanticipated developments. But, undeniably, it was Arabic that provided a defining label to all manner of people through its transmission of the word of God — the Quran — expressed through the emerging written language, word processing and propaganda techniques of modern autocratic and reactionary regimes. How did this language, in fact, attain its unique position within the Arab people’s psyche and historical memory? Today, it is enshrined in the UN as one of the six most widely spoken languages, with 313 million speakers. It is the official language in 25 countries, more than any other except English and French. Furthermore, the Arabic script is used in several African and Asian languages.

Islam, the author asserts, owes its geographical expansion to Arabic, since it became the language of the Quran, and Arabic, in turn owes its expansion to Islam, since the holy book was written in this language. At first, in 630 CE, the year of delegations, Arabs visited Muhammad in his new Medina state to offer allegiance. However, within 300 years, tribal divisions resurfaced, and within 1,000, the divided Arabs were ruled by a variety of imperialists: Turks, Persians, Berbers and Europeans. But the people known as Arabs today are actually a mix of two ethnicities: nomadic or semi-nomadic Arab tribes of the central and northern Arab Peninsula, and the settled population of the southern lands, the people of Yemen. Both spoke related Semitic languages, which led to a unified linguistic tradition and a shift from expressing culture, history and identity in oral form to the emergence of the first written book, the Quran. After 700 years, the language of administration within the settled, as opposed to the nomadic, areas where Arabs ruled became Arabic, replacing Persian and Greek. But the most important practice of the nomadic population, the ghazwa (raid) slowly returned. This gave life to Ibn Khaldun’s theory in the fourteenth century about Arabs being united by a group solidarity that often undermines their unity around a higher ideal. What still unites Arabs is language, he theorized — Arabic, the written form of Islam, which facilitated the Arabs’ entry into history.

There were reasons for Muhammad’s choice of Arabic as the language of the revealed text in the Quran, the author argues. First, there was the proven power of the shair (poet), also the shaman, to attract followers. Because of the glory of Islam and its revolutionary impact on the entire peninsula, it was easy to overlook and underappreciate the intellectual and linguistic trends preceding it. It is now forgotten, for instance, that Arabs were first mentioned in 853 BCE. By the fifth century CE, Arabic had developed but was not a vernacular. It was, instead, a mystical tongue for those with special abilities to draw the masses, a language for orators, diviners (kahins) and seers. Muhammad took the rhetoric of pre-Islamic poets further by adding slogans like allahu akbar (God is great), allah being a pre-Islamic god. Pre-Islamic Arabs also knew writing, the script having developed earlier through Nabatean, the language of Petra and Madain Saleh. Arabic was already well-developed and rich in synonyms: 80 names for honey, 200 for beard, 500 for lion, 800 for sword and 1,000 for camel. This explains how the qamus (dictionary) was taken from the Greek word okeanos (ocean).

The author’s elaboration on the theme of the Quran’s linguistic miracle is, clearly, the most controversial section of this tome. Following his emphasis on language, he attempts to explain the consequences of the migration of the southern tribe, the Ghassanids, to Mecca in the north after the collapse from neglect of the Mareb Dam in Yemen. This must be defined as meta-history, revolving around an unheeded prophesy and a warning by a seeress (kahinnah) named Tarifah. Her warnings and lamentations were expressed in a new form of high Arabic, revealed later in the Quran, made of rhymed prose (saj’) and rhythm but lacking poetic meter. This melodious and eloquent mixing was deemed effective if her listeners believed her. Thus, Muhammad was foreshadowed by the legend/history of Tarifah. Here is where the author diverges from Islamic orthodoxy and enters the realm of historical controversy.

For Muslims, Muhammad was inspired by the Archangel Gabriel, who used to appear to him when he was meditating in the Cave of Hira. One Quranic surah (chapter) recounts how Muhammad received the revelation of the Quran. Gabriel commands him, “Read (Iqra),” but Muhammad responds, “I cannot read.” Gabriel repeats the command, “Read, in the name of your God who created man.” Muhammad, who was reputedly illiterate, then began to receive the revelation. He went home to his Christian wife Khadijah, shaken and terrified. She contacted one of her relatives, who confirmed to her that Muhammad was indeed manifesting prophethood. This is the beginning of the Quranic revelation, believed to be one of only two miracles in Islam, the other being the nocturnal journey to Jerusalem. The author, however, glides by his rational explanation of the origins of a magnificent piece of religious text by ignoring the Islamic cannon. Yet, surely, he must be aware that generations of Muslims have also questioned the received version of the authorship of the Quran by the illiterate prophet. Unlike his story, however, Muslim skeptics latch on to Muhammad’s sessions with the monk Buhira in Busra al-Sham, as he used to travel to Syria every summer in charge of Khadijah’s caravans. But neither can any Muslim accept placing Muhammad within the ranks of sorcerers like Tarifah as an authentication of the literary prowess that led to prophethood.

The book’s thesis becomes clearer when the author begins to sketch the main highlights of modern Arab history, lamenting that the political quest for Arab unification remains as elusive as ever. He argues that this is due to the resurfacing of Ibn Khaldun’s eternal racial-bonding theory, which trumps an adherence to wider manifestations of Arab nationalism. He also asserts that Nasser of Egypt, the idol of Arab nationalists and personification of pan-Arab hopes, was no more than a façade of good looks, a command of Egyptian Arabic, and the use of the newly discovered transistor radio to spread his propaganda. The post-Nasserist era reflected the survival of Arab nomadism, as one Arab group raided another either in obedience to one of the great powers or in pursuit of more local glory. He concludes that many experiments in unification foundered despite the magical powers of their common literary heritage. But the author’s best analysis attempts to sum up reasons for the failure of the Arab Spring uprisings. Here we see how the use of slogans and the internet, all language-related, acting like “a foreign agent ... a semantic fifth column,” succeed for a while in ending the autocrats’ monopoly on voice. But, when everything failed, he quotes the Syrian poet Adonis: The Arabs were “stalled between seasons.”

In the author’s final view, post-uprising Arabs are still manipulated by rulers who have learned how to reduce the great Arab language to propaganda. He also laments the persistence of the raiding phenomenon as the most common interaction between states unified by language, citing Saddam Hussein’s war on Kuwait as a typical Arab raid. He also criticizes the League of Arab States for failing to carry out the unity project, ignoring the complicity in the 1940s of Anthony Eden in designing and promoting the ideal of confederal, rather than federated, Arab states.

Despite its flaws, this study is a very impressive investigation of the contribution of language to the development of national identity. No language has enjoyed such a stunning career as the promoter of nationalism and, some would say, even of Islam, as has Arabic. One may not agree with the author’s overemphasis on the Arabs’ modern atavistic tendencies and their proclivities toward “raiding,” failing and trying again, but at least he manages to link the present to the pre-Islamic age. His command of information, both literary and historical, of that specific period is a great contribution to our understanding of the background and cultural matrix of Islam.